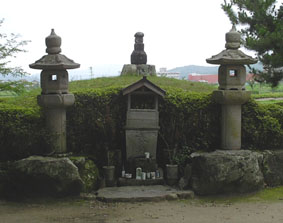 Place where Muneharu's head is buried

Muneharu was a younger son of Shimizu Munenori, a local power in Bingo province. He joined the Môri around 1576 when Kobayakawa Takakage pushed into the region. He held Takamatsu castle at the east edge of Bitchu province against Hashiba (Toyotomi) Hideyoshi's forces in 1582, refusing Hideyoshi's initial calls for surrender. 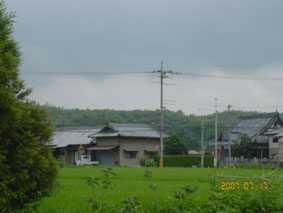 Mt. Ishii, where Hideyoshi's HQ was located, seen from the site of Takamatsu Castle

When Hideyoshi diverted the Ashimori River and flooded Takamatsu's grounds, Muneharu had no choice but to accept a surrender. As a condition for sparing the garrison, Hideyoshi demanded that Muneharu commit suicide. Muneharu did this in a boat in full view of the Oda army on 6/4.

Muneharu's head was taken to Hideyoshi's camp on Mt. Ishii for inspection then was buried nearby. However in 1910 it was moved to the site of the castle to make it more accessible to the many visitors.

Muneharu's son Kageharu went on to serve as a retainer of the Kobayakawa house. He also had a son Muneyuki.