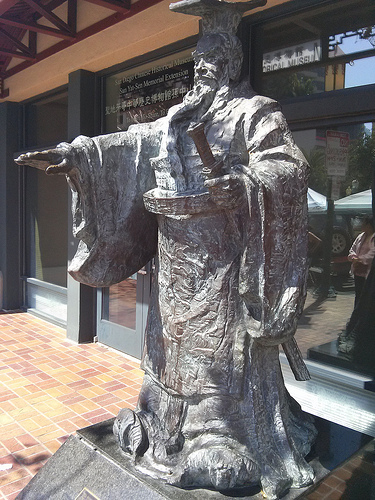 Statue of the First Emperor of Qin, at the Sun Yat-Sen Memorial Extension building of the San Diego Chinese Historical Museum

Qín shǐhuángdì (lit. "first emperor of Qin") is regarded as the first emperor of China, having ended the Warring States Period by uniting central China under his State of Qin. He is known for a number of famous accomplishments, including the construction of the Great Wall, a national road system, and a great tomb for himself guarded by a massive Terracotta Army. He is also infamous for his tyrannical rule, and in particular policies of burning books and burying scholars.

There are a number of theories as to the emperor's lineage, with some saying he was the son of powerful merchant Lü Buwei, and others that his father was King Zhuangxiang of Qin, also known as Yiren. In either case, according to one version of his biography, the man who would grow up to become emperor was born to a concubine of Lü Buwei's, at a time when King Zhuangxiang was Lü's prisoner. The boy was born in Handan, capital of the State of Zhao, and became King of Qin in 247 BCE at age 13, upon the death of King Zhuangxiang.

The young king entrusted affairs of state to Lü Buwei for a time, but after Lü was implicated in a plot against the throne c. 238 BCE, the king instead turned to the Legalist Li Si to advise him.

Defeating all his neighbors and rivals, and surviving a famous assassination attempt in 227 BCE at the hands of Jing Ke[1] the king united all of central China under his rule in 221 BCE. He would reign as "emperor" for only about ten years, but during this brief reign, he established standardized systems of weights & measures, language, and currency, as well as the geographical/political divisions of provinces and counties, and established a standard ideological or intellectual tradition through the practice of "burning books and burying scholars" - in other words, destroying those traditions, and their supporters, of which he disapproved. The Emperor also conducted a sword hunt, consolidating his power by confiscating weapons from the people, and melting them down to make giant statues 11.5 meters in height, quite remarkable for that time.[2] The Emperor is also said to have built new gardens or palaces for each state he defeated, "collecting" their culture or treasures, and displaying his incorporation of them into his empire.[3]

The First Emperor is said to have grown obsessed with immortality in his final years, trying numerous elixirs, and dispatching people to the islands to the east (i.e. Japan, possibly Ryûkyû) in search of the immortal land of Mt. Penglai. Rather self-important, the First Emperor is also said by Sima Qian to have climbed Mt. Tai and written three inscriptions praising his own greatness.

Following his death in 210 BCE, the emperor was succeeded by his son, most commonly known today simply as Qin Er Shi (Qin second generation [emperor]). He was buried in a massive, elaborate tomb outside Xi'an, which today remains largely un-excavated. It is said to contain great treasures, and a scale model (map) of the entire realm, with liquid mercury used for the rivers and lakes. The tomb, supposedly, is also equipped with ever-burning torches and numerous booby traps, though much about the tomb is likely purely legend. However, the massive Terracotta Army constructed to guard the tomb has been discovered, and largely excavated, and remains one of the most famous archaeological discoveries in the world.