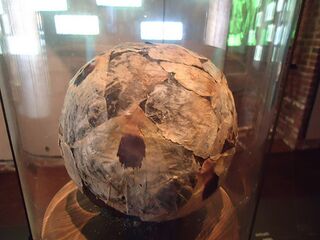 A replica opium ball on display at the Museum of the Chinese in America (MoCA) in New York Chinatown. Balls like these, each about the size of a bowling ball, were packed in crates of forty or so for shipment to China.

Opium, a drug made from the poppy plant, was a prominent export from British India to China during the Qing Dynasty. The widespread addiction to opium which resulted is frequently identified as a major societal problem of the mid-to-late Qing, and as contributing to the decline and collapse of the dynasty. It was originally imported (especially in such great volume) as a substitute for silver, of which the British had little supply, and yet which was one of the only goods the Chinese market & Court would accept. Though its cultivation and importation was quickly banned by the Qing Court, the British were quite successful in illegally smuggling much opium into China in the 18th-19th centuries, eventually resulting in the Opium War, which contributed, in turn, dramatically, to the decline and eventual collapse of the dynasty.

Though strongly associated with the "lethargic Orient" in the Western popular imagination, opium addiction and opium dens were a phenomenon unique to China, and opium was scarcely, if at all, smoked in Japan. Its importation was officially banned in the Harris Treaty of 1858, as a precaution in light of the then fairly recent events of the Opium War, but opium was never a prominent feature of Japanese recreational culture either before or after that time.

Opium was known, grown, and used medicinally in China since the Tang Dynasty, but it only first began to be smoked for pleasure in the 17th century. The Court banned its cultivation and importation in 1729, but smuggling was extensive, with roughly 4,500 chests of opium being brought into China in 1800, and roughly 19,000 chests each year in the 1820s. In the following decade, before the outbreak of the Opium War, this amount doubled again, to roughly 40,000 chests a year in the late 1830s.

Due in part to the importation of opium, but also due to increased Japanese exports of sea cucumber, abalone, and kelp, among other developments, by 1826, China switched from being a net importer of silver, to a net exporter. This, combined with the deleterious effects of opium addiction itself, had a devastating effect on China's economy.