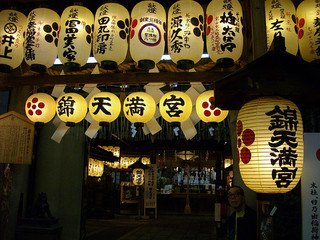 The entrance to Nishiki Tenmangû at night.

Nishiki Tenmangû is a Tenjin shrine located in central Kyoto.

The shrine has existed since the Heian period, and was established originally in the home of Sugawara no Koreyoshi, father of Sugawara no Michizane (Tenjin). It was later moved to the estate of Minamoto no Tôru (son of Emperor Saga, and a possible model for Hikaru Genji, the eponymous protagonist of the "Tale of Genji").

It was moved to its current location by Toyotomi Hideyoshi in the Azuchi-Momoyama period. Located today in the major Nishiki shopping district, between Teramachi-Kyôgoku and Shin-Kyôgyoku, the shrine represents the very center of Old Kyoto. Despite being one of the most famous & important Tenjin shrines in Kyoto, it has turned away from being a shrine of scholarship and literature, and is instead a shrine dedicated to love.

The worship hall holds old calligraphic plaques, Chinese lions, and attendants. Flowers bloom in the precincts in all four seasons, and a number of other small shrines, including an Inari shrine, a sun shrine, one for commercial prosperity, and others can also be found at the site. Furthermore, the famous capital water "Nishiki water" bubbles up naturally there from the ground. The water in that well comes up from 100 shaku (over 30 meters) below the ground, and is about 17-18 degrees C (62-65 F). A survey revealed it has no flavor, no smell, and no bacteria.

The road leading to the shrine extends all the way to Teramachi and Kyôgyoku, and in particular, the ichi-no-torii (the first, outermost gate) is famous for its legs sticking out into the northeast homes.