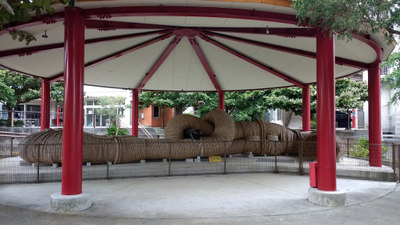 The tug-of-war rope on display in Kibôgaoka Park, Naha

The Naha Tug-of-War is an annual festival which evolved out of agricultural celebrations, developing by the early modern period into an urban event, in which representatives of the four towns (yumachi) of Naha competed against one another. The Tug-of-War has been officially recognized by the Guinness Book of World Records as featuring the world's largest rope.

The Tug-of-War traditionally celebrated the accession of a new king, as well as being performed on other celebratory occasions. In addition to the competition itself, representatives of the various towns and villages raised elaborate hatagashira (banners, decorative poles) in a great show of local pride. Traditional East Asian-style fireworks called hiyaa (fire arrows) are still used today as part of the celebrations.[1]

The event was held continuously until 1935, and then was discontinued until 1971, when it was revived. Though traditionally held along the street in front of the zaiban bugyôsho in the Nishi neighborhood of Naha, it is now held along Kokusai-dôri.[2] The Tug-of-War has since become a popular local event and successful tourist attraction.