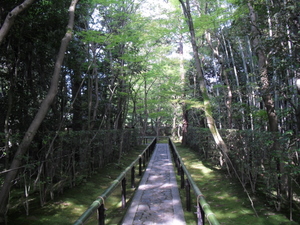 The temple is known for its beautiful stone entrance path, lined with trees and bamboo. It is particularly famous for its Japanese maples.

Hosokawa Sansai, the founder of Kôtô-in, was one of seven of Sen no Rikyû's most famous students, and it is said that the shoin (the study) at Kôtô-in, known as Ihokuken 意北軒 may have been Rikyû's home, moved here in 1602 by abbot Gyokuura Ôshô. It features fusuma (sliding door/wall) paintings by Kanô Yasunobu.

The tea room connected to the study, is called Shôkô-ken 松向軒 and was built by Hosokawa Sansai in 1628. It is two tatami in size as per his tastes, and is connected to a three-tatami water room.

The garden near the study was arranged in the early Edo period, and the garden in front of the main hall is famous for its maples.

The graves of Tadaoki and his wife Hosokawa Gracia, along with those of other members of the Hosokawa family can be found on the grounds. Izumo no Okuni and Nagoya Sansaburô, who are said to have founded kabuki, are also buried here, but their graves, unlike those of the Hosokawa, are not open to the public. A stone lantern erected near the Hosokawa graves is said to have been a donation or gift from Sen no Rikyû, against the wishes of Toyotomi Hideyoshi. In the possession of the Hosokawa for many years, it was designated in 1642 to become Tadaoki's grave marker, and was moved here to Kôtô-in for that purpose upon Tadaoki's death two years later.