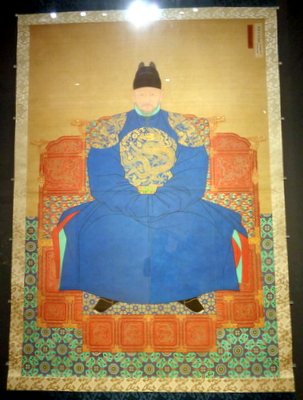 This article is about the Joseon Dynasty monarch; for the 10th century king, see King Taejo of Goryeo.

King Taejo, also known as Yi Sŏnggye, was the founder of the Korean Joseon Dynasty.

He was born the son of Yuan Dynasty officials of Korean ethnicity, and was raised in the Shuangcheng (K: Ssangseong) commandery of the Yuan Empire, what is today North and South Hamgyeong province. There, he grew up in a fairly multi-cultural, multi-ethnic environment, surrounded by Jurchens, Mongols, Han Chinese, and Koreans. Ssangseong was re-captured by Goryeo Dynasty Korea from the Mongols in 1356, and when the Ming Chinese court demanded the region back in 1388, Taejo initially gathered troops to attack the Ming. Ultimately, however, he decided that attacking the Ming was futile; he turned back, and used his army to attack and overthrow Goryeo.[1]

The head of a faction of military officials who allied with literati (civil) officials in seeking social reform, his preference for negotiation with Ming Dynasty China rather than military means of solving a territorial dispute over his home region of Ssangseong led to the fall of the Goryeo Dynasty, and the establishment of his own, new, Joseon Dynasty, in 1392.[2]

Though Taejo requested investiture from the Ming several times, he was repeatedly rejected. Scholars such as Ji-Young Lee attribute this rejection to a concern on the part of the Ming that Taejo was too friendly with the Jurchens, and was perhaps considering conquering parts or all of the Liaodong region, a vital strategic buffer zone for the Ming. In his letters rejecting investiture, the Hongwu Emperor repeatedly advised Taejo against the advice of Joseon official Jeong Dojeon, the head of the planned Liaodong campaigns; ultimately, Hongwu requested that Jeong be sent to China as a hostage. Thus, it was not until the time of Taejo's successor that Joseon received investiture from the Ming court.[3]

The Joseon court produced twenty-six formal portraits of King Taejo; however, only one is known to survive today. The surviving painting, today in the collection of the National Museum of Korea, is an 1872 copy of an original, enshrined in Gyeonggijeon Hall in Jeonju in 1410, and restored in 1763. Gyeonggijeon Hall was one of six official portrait halls established by the court to host royal portraits in the provinces, thus extending the sense of royal authority out into the countryside.[4]