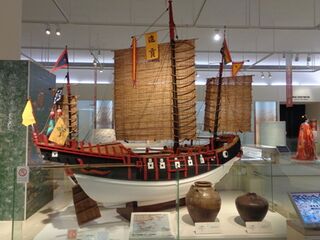 A model of a Ryukyuan tribute ship, on display at the Okinawa Prefectural Museum

Kaisen, or keeshin in Okinawan,[1] were a type of Ryukyuan ship used to carry official missions to Kagoshima. They were typically ships that had previously been used to sail to China, as either shinkôsen ("tribute ships" carrying official Ryukyuan tribute missions to China) or sekkôsen (ships which went to bring Ryukyuan officials back from China, often transporting trade goods as well); after three or so such journeys to China, a ship would often be stripped of its weaponry, and thus transformed into a kaisen, to be used for journeys to Kagoshima.[2] While extremely similar to Chinese ships of the time in their style and form, these Ryukyuan ships were not identical to Chinese styles, and bore distinctly Ryukyuan features which set them apart.

While shinkôsen carried official missions to China roughly once every other year, sekkôsen traveled to Fuzhou in the alternating years, ostensibly to bring the previous year's mission back home; however, both shinkôsen and sekkôsen also carried considerable amounts of tribute/trade goods, playing a vital role in the flow of silver, herbal medicines, a variety of luxury goods, and other products, between China, Ryûkyû, and Japan.

While the kingdom initially had no ships or shipwrights of its own, and thus simply sent envoys as guests aboard Chinese ships for the first few decades of its relationship with the Ming Dynasty (i.e. in the 1370s-1380s), Ryûkyû began receiving ships as gifts from the Ming in 1385. Over the next 50 years, the Ming provided Ryûkyû with some thirty ships, though according to the Rekidai Hôan only seven were still seaworthy as of 1439. Many of these ships may have been given to Ryûkyû after serving years or even decades in the Ming navy. The Ming also provided captains, navigators, crew, and other personnel necessary for effecting the logistics and safe transport of tribute missions.[3]

By sometime in the 15th century, the kingdom had acquired the facilities and experts to engage in ship repair within Naha. It obtained its last ship from the Ming court in 1548, and began constructing its own vessels in earnest after that; these Ryukyuan-built ships are believed to have been smaller and of poorer quality, however. Such ships were generally capable of making the trip to Fuzhou, but not to destinations in Southeast Asia; Ryûkyû's participation in the Southeast Asia trade was beginning to be severely reduced by this time anyway, however, due to competition with Portuguese and other traders, and all the more so after the lifting of Ming maritime bans in 1567.[4]

While the size of Japanese ships is traditionally measured in koku (a reference to the amount of cargo the ship can hold, and thus an approximation or indication of the size of the ship overall), the size of a Ryukyuan ship was typically recorded by the number of tan wide its sails were. Ryukyuan vessels ranged widely, from those with sails three tan in width to those with sails as large as 17 or 18 tan.[5] The shinkôsen which traveled to China, and the kaisen sailed to Kagoshima were on the larger side, with sails 12 to 15 tan in width, and cargo holds roughly 1,260 koku in size.[6]

Kaisen were typically around thirty meters long and eight meters wide, with a main mast roughly thirty meters in height. They were of a nearly identical design to Chinese junks plying the same waters.

When serving as shinkôsen or sekkôsen and journeying between Ryûkyû and China, these ships occasionally faced the threat of pirates, and so were well-armed. For example, in 1796, a sekkôsen was attacked by three pirate ships while on the return journey from China; the Ryukyuans returned fire, and were able to make it safely back to Ryûkyû.[7]

The sails, like those of sabani (Okinawan fishing canoes), were made in a manner closely related to that used in China. Thin slats of bamboo were interwoven to form a six-sided lattice, a pattern or method known in Japanese as mutsume ami (六つ目編み). Branches, leaves, or grasses were then interwoven into the lattice to form a relatively solid sheet which could catch the wind.[8] As in traditional Chinese "junks," the sails were held up not just by one or two static standing crossbars (as in European sailing ships), but rather by a series of numerous bamboo cross-bars which were raised and lowered as part of the sail.

Fringed banners in red and yellow, with a red sun at the center, served as an emblem of the Ryûkyû Kingdom (the king of Ryûkyû was often referred to as tedako, or "son of the Sun"). Though the use of yellow was officially restricted in Qing Dynasty China, it being a color symbolic of the Imperial establishment, these banners were one way in which Ryûkyû expressed its own identity as an independent kingdom, and the Qing are said to have raised no objections to Ryûkyû employing Imperial shades of yellow on their ships' banners in this way.[9] Rectangular flags featuring red suns were also common; some scholars have suggested that the color or border of these flags indicated the rank or title of the Ryukyuan officials aboard the ship, but Akamine Mamoru has noted he is unaware of any reference in the royal records to that being the case.[10]

A number of streamers were flown from the top of the mast and from the rear of the ship. They are said to have been intended to resemble or invoke the shape of koi, dojô, or other fish. Flags with stripes in five colors were meant to represent the five elements, while banners or streamers in the form of centipedes were associated with the deity known in Japanese as Bishamonten. Banners depicting the Big Dipper were also common. All of these were also flown on Chinese ships.[11]