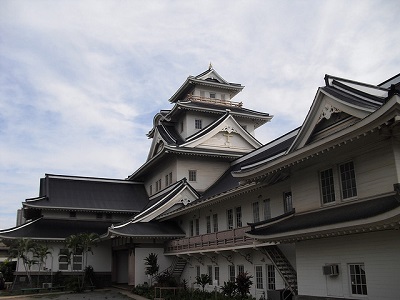 The Makiki Christian Church, established by Okumura Takie in 1904. This building, inspired by late Sengoku or Edo period castle architecture, dates to 1932; its appearance is based largely on that of Kôchi castle.

Though Japanese immigrants to Hawaii were almost exclusively followers of Buddhist and Shinto beliefs and practices, the earliest Buddhist temples to be established by or for the Japanese community in Hawaii came only after the establishment of a number of Christian churches meant to serve that community.

The first formal attempts to convert members of the Japanese community were made by a Dr. C.M. Hyde, of the Hawaiian Mission Board, who led English-language lessons and Bible classes for Japanese on the plantations, but found little success in converting anyone. The first Japanese minister to establish a church in the islands was Rev. Miyama Kanichi, who returned to Hawaii in 1887 from a Methodist Church Conference held in San Francisco that year, and who attempted to appeal to plantation workers' national pride as Japanese, and to their individual personal pride, to turn them away from drinking and gambling. Japanese Consul General in Hawaii from 1886 to 1888, Andô Tarô, was also a converted Christian, and played a prominent if brief role in the temperance movement in the islands. A Rev. Shimizu Taizô arrived in Honolulu from San Francisco in 1888 to aid Dr. Hyde, and a Rev. Okabe Jirô arrived the same year in Hilo, remaining there until 1892, when he too moved to Honolulu. Finally, in 1894, Rev. Okumura Takie, a recent graduate of Dôshisha University, arrived in the islands. These were the first prominent Japanese Christian leaders of missionizing efforts aimed at the Japanese community there.

A Japanese Christian Church was established on Kukui Street in Nu'uanu on June 6, 1897, with the land and the building being paid for by $8000 collected from donors in both Japan and Hawaii. Okumura became head of that church in 1904, and established a second mission in the Makiki neighborhood of Honolulu that same year, but was also influential in establishing the islands' first Japanese language school, in 1896. Another graduate of Dôshisha, the Hokkaido-born Rev. Shigefusa Kanda, came to Hawaii in 1893 and founded the Kohala Church on the island of Hawaii.

Many members of the Okinawan community in Hawaii formed their own separate congregations. One of the earliest was the Reimei Kyôkai (Church of the Dawn) in Palama, established in 1921 by Rev. Higa Seikan (Gashû) at the request of Rev. Charles Schwartz, an American Methodist missionary who had just returned to Hawaii from an extended tour in Okinawa.[1]