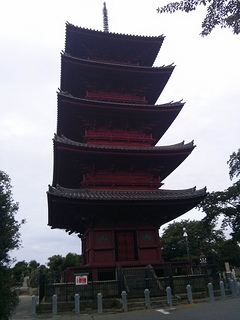 The pagoda at Ikegami Honmonji. Dating to 1608, it has been designated an Important Cultural Property.

Honmonji is a Nichiren-shû Buddhist temple in the Ikegami neighborhood of Tokyo's Ôta-ku. It is one of the top four temples of the Nichiren sect, and is said to have been the site of Nichiren's death.

The residence of Ikegami Munenaka previously stood on the site, which is sometimes said to have been converted into a temple in 1274.[1] Nichiren himself stayed with Munenaka at the latter's residence for some time in 1282, while attempting to recuperate from an illness, but died there in the end. Many sources assert the temple to have not been founded until after this event.

The temple's pagoda, which dates to 1608, has been designated an Important Cultural Property.