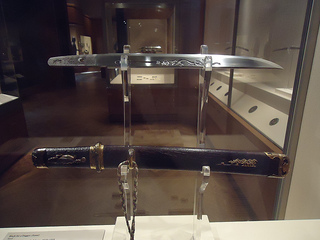 Gassan Sadakazu was a prominent swordsmith of the Meiji period, one of the chief smiths to continue producing swords after the 1876 edict banning the wearing of swords. For a time, he worked chiefly in reproductions of famous historical blades.

Sadakazu was born in Ômi province, the son of Tsukamoto Shichirôbei. He was adopted at age seven by Ôsaka-based swordsmith Gassan Sadakichi, and after years of training is said to have produced his first blade by age 14. The Gassan line claimed descent from the Gassan swordsmiths of Dewa province of the Heian period, but Sadakazu's work also drew upon the styles of the Sôshû and Bizen schools.

Many swordsmiths stopped producing swords in 1876 following the haitô-rei, but Sadakazu continued to work, and was officially appointed an Imperial Court Artist in 1906/4.