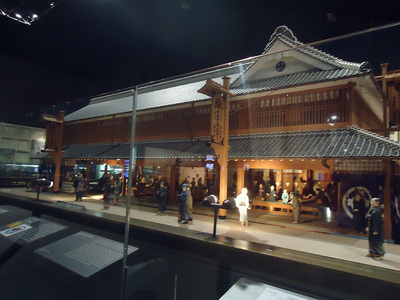 A model of the Echigo-ya, on display at the Edo-Tokyo Museum

The Echigo-ya was a major and innovative dry goods shop in Edo. Headed by the successive heads of the Mitsui family, the business later developed into the Mitsui & Co. holding company, one of the largest zaibatsu/keiretsu in Japan.

Mitsui Takatoshi, who was originally from Matsuzaka in Ise province, opened his first Mitsui Echigo-ya kimono shop in Kyoto in 1673, and then later opened a dry goods store by the same name in the Honchô-nichôme neighborhood of Edo. Unlike other merchants, who often visited customers' houses, and who allowed for haggling, Mitsui's goods were available only at the shop, and he accepted only cash. This attracted the ire of other shopowners, and forced Mitsui to relocate to Suruga-chô in 1683. Takatoshi later expanded his business, establishing moneychangers in Edo, Osaka, and Kyoto, and eventually becoming an official moneychanger for the Tokugawa shogunate.

A major sight, the Echigo-ya appeared in numerous ukiyo-e woodblock prints of famous sights in Edo, city guidebooks, and the like.

Later directors of the Echigo-ya took on the name Mitsui Hachirôemon, in succession.