From SamuraiWiki
(Redirected from Asakura castle)
Jump to navigationJump to search 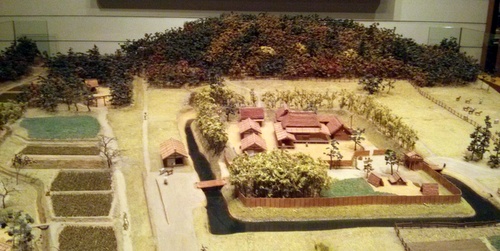 A scale model of the Asakura yakata, at the National Museum of Japanese History

Ichijôdani, also known as Asakura-yakata, was an Asakura clan fortress in Echizen province which Oda Nobunaga seized in 1575. It is said that after Asakura Yoshikage fled for Ôno, the fortress burned for three days.

The fortress is said to have closely resembled that of the Kamakura shoguns in general layout,[1] and might be taken as a representative example of typical samurai yakata of the time, all the way up through the destruction of the Ashikaga clan shogunal residence in 1573. The Asakura compound in Echizen was surrounded by earthworks and a moat, 120 meters on a side, and covered an area of roughly 1700 tsubo, or 5,600 square meters. The southern half of the compound included within it the lord's residence and meeting halls for banquets and ceremonies, organized around a central garden. The northern half contained kitchens, and retainers' residences, known as samurai-rô, as well as small buildings used by lower retainers (genin) for various everyday tasks. Surrounding the fortress were pastures, fields, shrines and temples associated with the clan, and the homes of other retainers.[2]

Following archaeological surveys begun in 1971, some parts of the castle have been rebuilt.