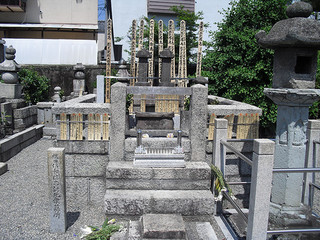 A grave at Amida-ji for those who died at the Honnôji Incident in 1582.

Amida-ji, located on Teramachi-dôri in Kyoto, is a Jôdo-shû temple founded around 1532-1554 by Seigyoku Shônin. It was originally located further west, near Imadegawa-Ômiya. Seigyoku enjoyed the strong support of Emperor Ôgimachi, and was ordered to aid in collecting donations for the Great Buddha Hall at Tôdaiji; Ôgimachi also named this temple a chokuganji, a temple built upon Imperial orders.

Seigyoku had deep connections to the Oda family, and on 1582/6/2, on the day of the Honnôji Incident (when Oda Nobunaga was betrayed and killed), it is said that Seigyoku gathered the bones and/or other remains of Nobunaga, Nobutada, and the roughly one hundred followers who died that day, and buried those remains at Amida-ji. Wooden statues of Nobunaga and Nobutada are held inside the main hall, and in the graveyard of the temple, there is a grave for all those who died at Honnôji, as well as the graves of the haiku master Chômu, and Confucian scholar Minagawa Kien.

The temple was moved to its current site a few years later, in 1587.