Also called the Amago clan, they were descended from Takahisa, a grandson of Rokkaku Takauji. Takahisa is said to have taken the name 'Amako' since he had been raised by a nun (ama (nun), ko (son)). He took Tomita castle in Izumo province for the Kyôgoku shugo and his descendants were powerful in Izumo from the 14th Century until the mid-16th Century. From their headquarters at Gassan-Toda castle, the Amako challenged, with mixed results, the Ôuchi and, later, the Môri. They were destroyed as daimyô by Môri Motonari in 1566 and disappeared as a military force with the suicide of Amako Katsuhisa in 1578. 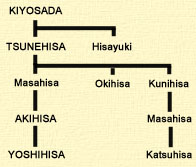