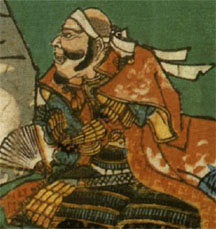 Yamamoto Haruyuki was originally from Mikawa Province and sought service with the Imagawa family, who doubted he had any worth and so received him coldly (he was said to have been partially lame in one leg). Some time later he was noticed by Takeda general Itagaki Nobutaka and granted an audience with Takeda Shingen of Kai. Shingen was so impressed with Haruyuki that he gave him a 1,000-koku fief and afterwards summoned him from time to time for advice. Yamamoto quickly proved his worth to his new lord on campaign, providing valuable service during Shingen's wars in Shinano. In fact, he is even recorded as designing a siege tower to assist in bringing down Shinano's forts. Shingen rewarded Haruyuki for his efforts with the title kansuke and an increase of income to 4,000 koku, the latter coming after Haruyki played an important role in the defeat of the Murakami at Toishi (1551) . He was present for the battles at Kawanakajima with Uesugi Kenshin, and his career culminated in the 4 of those contests. In 1561 Shingen and Kenshin had once again confronted each other at Kawanakajima and for some time avoided a direct fight, with Kenshin positioned on top of Saijoyama while the Takeda were camped around Kaizu Castle to the east. Yamamoto suggested that Shingen divide his 20,000-man host in half, with one part attacking Saijoyama in a morning raid while the other moved onto the Hachimanbara to wait along Kenshin's likely avenue of retreat. Shingen accepted this plan (dubbed the 'woodpecker' strategy) and accordingly dispatched Kosaka Masanobu and Baba Nobufusa to Saijo while he personally led the rest of the Takeda army across the Chikuma River and onto the plain beyond. Unfortunately, Kenshin deduced Shingen's scheme and that same night led his entire army of 11,000 men down Saijo and across the river. As the morning was breaking, Kenshin launched a devastating charge against Shingen's now outnumbered force even as Kosaka and Baba were discovering that Saijo was abandoned. Shingen's talented younger brother Nobushige and great uncle Morozumi Masakiyo were killed in the fray, and Takeda Yoshinobu, Shingen's heir, was wounded. Believing that his plan had caused the downfall of his lord (or at least cost him dearly), Yamamoto took up a long spear and threw himself into the battle. Though at least 60 (and with a lame leg and only one good eye), he fought courageously, suffering numerous wounds. Spent, he retired to a small knoll and committed suicide. Shingen's army survived the battle, however, and Shingen, who regretted the loss of his chief strategist, ordered him buried on the battleground. Yamamoto Kansuke, who was attributed with a book of strategy (the Heiho Okugi Sho), would later be numbered among Shingen's 24 Generals.