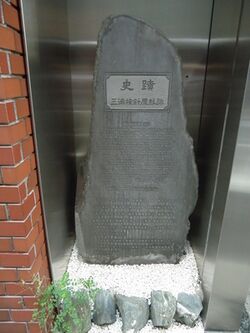 An English navigator who settled in Japan. He is now famous as the prototype of the hero of James Clavell's quasi-historical novel Shogun.

Adams was pilot of the Dutch ship Liefde which arrived at Bungo province in Kyushu on April 19, 1600. By the order of Tokugawa Ieyasu, then the chief tairô (senior counsellor), Adams was brought to Osaka as representative of the crew. He had an interview with Ieyasu on May 12[1] and apparently favorably impressed him. After that Adams served Ieyasu in a number of fields, even building him an 8-ton European-style boat. He also served as interpreter and as an agent for the Dutch and English companies. In the same way Adams played a role of no small importance in shaping the position of the bakufu towards Spain, Portugal and the Catholic Church.

Adams dreamed of returning to England, but the government would not let him. He became a hatamoto and was given land in the Miura Henmi (三浦逸見) district of Sagami province (near the mouth of Edo Bay), along with 80 servants,[2] and so was called Miura Anjin (三浦按針), anjin meaning "pilot." Though he was married to an Englishwoman, he also married a Japanese woman. He died of illness in Hirado in Hizen province (the Dutch, English, and Portuguese all had establishments there) in 1620. There is a grave in Henmi (now Yokosuka City) said to be his (Anjin-zuka). Following Adams' death, his son continued to trade for a time under the name "Miura Anjin," employing his father's red seal trading license.[3]