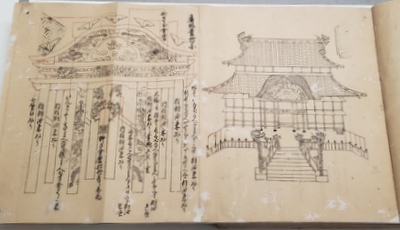 A diagram of the design and construction of the karahafu entrance to the Main Hall of Shuri castle, in the Momourasoe udun gofushin ezu chô. Naha City Museum of History.

The Momourasoe udun gofushin nikki is a chronological record of the process of a series of repairs conducted on Shuri castle (royal palace of the Kingdom of Ryûkyû, in Shuri, Okinawa Island) between 1842 and 1846.

The diary, held today at the Naha City Museum of History and considered one piece of the large Shôke monjo collection of royal documents designated as a National Treasure in 2006, consists of four volumes. The first three volumes detail the repair process in textual records beginning with early preparations in 1842 and ending with the completion of the project in 1846. The final volume, entitled Momourasoe udun gofushin ezu chô, consists of a series of diagrams and illustrations closely similar to, and perhaps based upon, a set of 1768 records known as Momourasoe udun fushin tsuki go-ezu narabi ni gozaimoku sunpôki. These include ezu diagrams of various sections or views of portions of the Main Hall (J: Seiden, Okinawan language: Umundasui udun) of the Shuri royal palace, including detailed notations as to the dimensions, colors, and other aspects vital for repair or reconstruction, as well as sunpôki diagrams of the dimensions of each piece of wood that went into the construction of the palace, what type of wood it was, the number of beams or pieces used in each section, the number of nails or other metal pieces, and so forth. While an original copy of these 1768 ezu diagrams survives today in the collections of the Okinawa Prefectural University of the Arts Library, the sunpôki portion of the 1768 records survives only as transcribed in the notebooks of 20th century scholar Kamakura Yoshitarô; these notebooks are also held at the University of the Arts Library.

Both the 1846 Gofushin nikki and the 1768 records were vital resources for the effort to restore the palace following World War II. Scholars such as Takara Kurayoshi relied heavily on these two sets of sources in figuring out the precise dimensions, style, and construction of the hall.