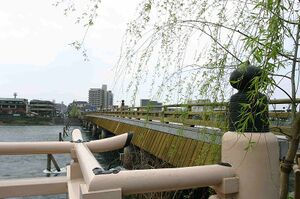 Uji Bridge is a famous bridge spanning the Uji River and located in Uji, near Kyoto. Originally built in 646, the bridge has been rebuilt numerous times, most recently in 1996, and has appeared in countless works of art and literature, including the Genji monogatari and Kokinshû.

The bridge has been the scene of battle at least three times: in 1180, 1184, and 1221. On at least the first two occasions, the bridge was torn up in order to impede the enemy's progress across the river, and in all three cases, the pursuing party successfully crossed nevertheless and secured victory.

The bridge's role as a strategically important point came to the fore once again in 1236, during a conflict between the Imperial Court and the warrior monks of Mt. Hiei. Forces from the Rokuhara Command were ordered to tear up the bridge and hold the position against the monks' crossing and progress towards Kyoto, which they did successfully[1].

During the Edo period, the crossing of the bridge became a significant first stage in the journey of the annual tea caravan carrying the newly harvested crop of ujicha (Uji Tea) to the shogunal capital of Edo. The journey was made by roughly 100 people in about 12 days, attracting much attention and celebration as they departed the Kyoto area. It is said that the caravan was seen to be of such importance that daimyô would yield to it, when they met the caravan along the road.

On occasions when the river flooded, the bridge often suffered severe damage, as did the nearby Byôdôin temple and other nearby structures. Takizawa Bakin reports in his diary that this occurred during his visit to Kyoto in the summer of 1802[2].