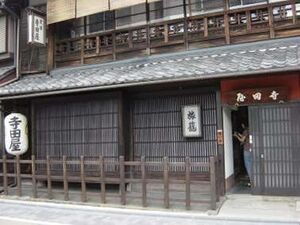 Approximately 60 to 70 pro-imperial loyalists met at the Teradaya to plot a revolt in Kyoto aimed at seizing control of the Imperial palace. Nearly 50 of these ronin conspirators hailed from Satsuma. When Shimazu Hisamitsu, de facto daimyo of Satsuma and a supporter of "Kobu Gattai" (union of court and camp), caught wind of the plot, he was outraged and ordered that they be brought back to Satsuma’s residence in Kyoto and to eliminate them if they refused.. Hisamitsu’s actions were in accordance with the edict he received from Emperor Komei ordering him to suppress Kyoto’s ronin problem.

As it was highly unlikely that any of these Satsuma shishi would back down and surrender peacefully without a fight, blood would have to be spilled. To that end, nine Satsuma samurai were dispatched to bring their wayward brothers back to Kyoto-- or to bring the swords of justice down upon their unsuspecting fellow clansmen. After a brief and bloody clash that left numerous rebels and at least one Satsuma swordsman dead, an emotional appeal was issued to the remaining Satsuma rebels to obey Hisamitsu’s orders and return to the Satsuma residence in Kyoto. Shocked at the Satsuma-on-Satsuma blood letting and influenced by the strength of the emotional appeal to surrender, the remaining Satsuma shishi yielded. Thus, the first planned armed anti-Bakufu plot came to naught before it could be hatched.