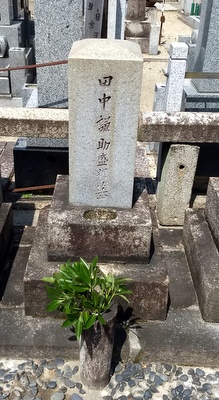 Tanaka's grave at Daikoku-ji in Fushimi, alongside other "martyrs" of the Teradaya Incident

Tanaka Kensuke was a Bakumatsu period Kagoshima han retainer who was involved in the sonnô jôi movement, and in the Teradaya Incident of 1862.

Kensuke was born into the Ikeda family of Shimazu retainers, but was adopted into the Tanaka family. After training at the Zôshikan domain school, he became a middle page (chûkoshô) at the Satsuma Edo mansion. In 1859/11, he joined the Seichûgumi. The following year, the Seichûgumi played some role in plotting the assassination of Tairô Ii Naosuke, alongside Mito han retainers. Kensuke then requested to return to Kagoshima to fight for the domain, but was denied.

In 1862/4, he traveled to Osaka as part of Shimazu Hisamitsu's retinue on a formal journey to Kyoto. On 4/23, Kensuke left Osaka alongside Arima Shinshichi and a number of others and made their way to the Teradaya in Fushimi, where they were to plan an attack on Kanpaku Kujô Hisatada and others; after an argument with Hisamitsu's messenger ordering an end to the plot, he committed suicide the following day on 1862/4/24.