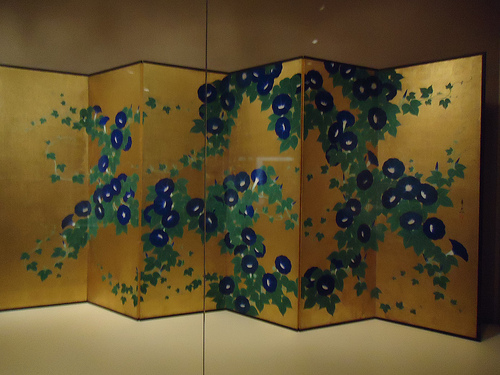 "Morning Glories" (asagao). One of a pair of folding screens paintings by Kiitsu. Metropolitan Museum of Art. Acc. no. 54.69.1,2.

Suzuki Kiitsu was a prominent late Edo period painter in the Rinpa style, a student and stylistic successor of Sakai Hôitsu.

Kiitsu was originally trained as a dyer of textiles, but later came to study painting under Sakai Hôitsu, and collaborated with Hôitsu on a number of projects. These included the Kôrin hyakuzu ("One Hundred Pictures by Kôrin"), a woodblock-printed book collecting line-drawing reproductions of compositions by Ogata Kôrin (d. 1716), a painter of a few generations prior, after whom the Rinpa style took its name.