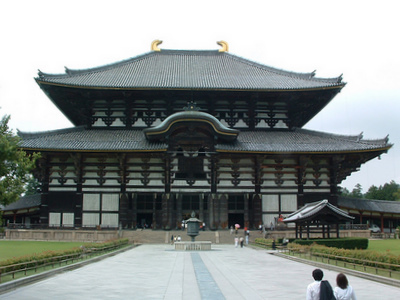 The Great Buddha Hall at Tôdai-ji, destroyed in the battle.

The Siege of Nara took place as part of the Genpei War of 1180-1185. Taira forces led by Taira no Shigehira, and possibly numbering as many as 40,000 horsemen, according to the Heike monogatari[2], marched on the former imperial capital of Nara, aiming to subdue the temples of Kôfukuji and Tôdaiji which had opposed the Taira both militarily and politically. The warrior monks who fought to defend the temples are cited by the war tale as numbering around 7,000, none on horseback[3].

The Taira had gained power in the 1150s at the expense of the Minamoto and Fujiwara clans; since the latter still maintained associations with the major temples of Nara, and therefore some considerable political power in the area, tensions between the Taira and Fujiwara simmered for over 20 years until the Taira finally made this move in the final days of Jishô 4 (Jan 1181). Kôfukuji was the tutelary temple of the Fujiwara clan, and furthermore, Kôfukuji and Tôdaiji had supported the Minamoto clan choice for imperial heir, Prince Mochihito, over that of the Taira, the young Antoku,[4] a conflict which broke out into outright battle at Uji several months earlier, marking the beginning of the Genpei War.

According to the Heike monogatari, Taira no Kiyomori sent a force of fifty mounted samurai, with no armor or bows & arrows, to seek a resolution to the conflict with the temples in a non-violent manner, akusô warrior monks sent by the temples captured and decapitated sixty of the riders, leading Kiyomori to order Shigehira to attack[3].

The battle itself is said to have begun at eight in the morning[3]. Though the monks had prepared various physical defenses, presumably in the form of wooden stockades or earthworks, the battle soon becomes a more disorganized general melee, the fighting continuing until nightfall[3].

Sources seem to disagree on whether the city was set ablaze on the first night of fighting (according to Varley) or the second night (according to Morse). In any case, as night fell, Shigehira ordered houses in the northeast corner of the city to be set aflame, possibly in large part simply in order to illuminate the battlefield, a not uncommon practice, it would seem, at this time[3]. The blaze quickly spread, aided by the wind, and eventually consumed Kôfukuji, Tôdaiji, and Gangôji[2], killing over 35,000 people, many of whom had sought refuge in the temples from the battle[3].

The deaths and destruction were met with shock and dismay by the court, and though destroying the temples themselves may not have been intentional on Shigehira's part, he came to be reviled for it.

This and other battles of the Genpei War brought widespread destruction to major religious centers and objects. Following the end of the war, in the early Kamakura period, many of the chief religious treasures of Nara and Kyoto were replaced or restored by the sculptors of the Kei school, including Unkei, Kaikei, Tankei[2].