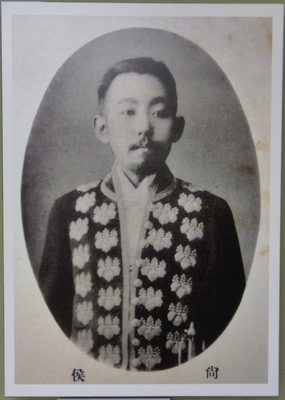 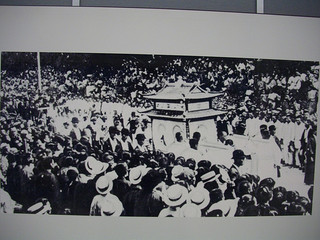 Shô Ten was born in Shuri and was from birth crown prince to the Kingdom of Ryûkyû. He underwent his coming of age ceremony in 1878 and was married the same year.

In March 1879, his father Shô Tai formally abdicated upon the orders of the Meiji government, which abolished the kingdom, transforming Ryûkyû han into Okinawa Prefecture, with officials appointed from Tokyo to administer the islands[1] The former king was ordered to report to Tokyo, but feigning illness, he temporarily found shelter at Shô Ten’s palace. Shô Ten was sent to Tokyo as a hostage and partial appeasement as Ryukyuan officials searched for ways to delay the former king’s departure.[2]

As Marquis, Shô Ten held a hereditary seat in the House of Peers in the National Diet. He was joined in representing Okinawa by a Japanese resident appointed to represent the prefecture's wealthiest taxpayers for the first time in 1918[3].

The Marquis died on September 20, 1920 in his mansion in Shuri and was entombed six days later in Tamaudun, the royal mausoleum near Shuri Castle, in accordance with traditional Ryukyuan royal funerary rites. He would be the last member of the Shô family to be honored in such a manner[4].

Shô Ten's eldest son Shô Shô (1888-1923) succeeded him as kôshaku and as a member of the House of Peers. His second son was named Shô Kei.[5] Shô Shô's eldest son in turn, Shô Hiroshi (1918-1997), played a prominent role in keeping and sharing the treasures of the Shô family; a large collection of historical documents held today by the University of Tokyo Shiryôhensanjo related to the Shô family and Ryukyuan court are labeled as being from Shô Hiroshi's collection.