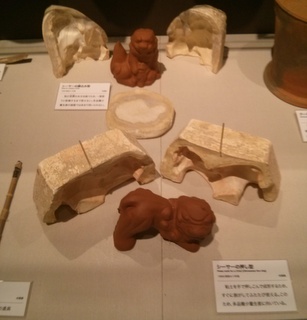 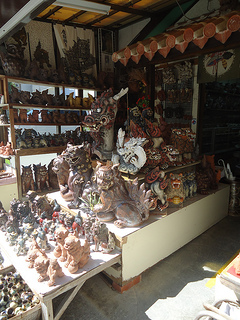 Up until the Meiji period, Tsuboya remained a center of production of relatively simple arayachi (荒焼, "rough wares"), or unglazed ceramics. It was only in the Taishô period that, seeing the great popularity of Arita wares in the mainland Japanese market and seeking to expand their market share, the Tsuboya potters began producing jôyachi (上焼, "completed wares"), that is, glazed ceramics, with elaborate designs of fish, dragons, and the like.

Tsuboya led Ryukyuan pottery through the 1960s, but in the 1970s, environmental and other concerns inspired many potters to relocate from Tsuboya - in the center of the city of Naha - to other areas, including Yomitan and Ôgimi-son, where they built new kilns in the traditional manner. A number of kilns are still active in Tsuboya, however, while other Tsuboya kilns are today maintained as cultural/historical sites. The Aragaki house and its associated agari-nu-kama ("eastern kiln") have been designated a National Important Cultural Property, while the fee-nu-kama ("southern kiln"), the only remaining arayachi (unglazed wares) kiln in the neighborhood, has been designated an Important Cultural Property by the prefecture. Both feature nobori gama climbing kilns; the agari-nu-kama is roughly 23 meters long by 4 meters wide, while the fee-nu-kama is roughly 20 meters long, and eight meters wide. The latter produced chiefly jugs for water and awamori, and ceramic funerary containers, and is known for the relatively intact state of its stonework construction.[1]