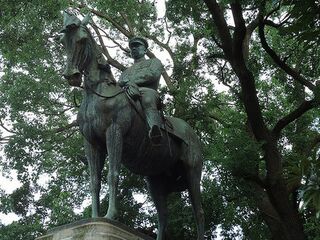 Ôyama Iwao was a prominent military commander and government official of the Bakumatsu and Meiji periods.

He fought for Satsuma han in the Satsuma-England War of 1863 and in the Boshin War of 1868. In 1877, however, he stood opposed to his cousin Saigô Takamori, and commanded Imperial Japanese Army troops in suppressing the Satsuma Rebellion.