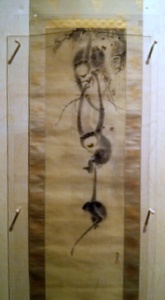 "Five Monkeys" by Mori Sosen, at the Honolulu Museum of Art

Mori Sosen was an Edo period painter, known especially for his paintings of monkeys.

Along with his elder brother Mori Shûhô, Sosen founded a school of animal painting in Osaka. Through examination and copying of Chinese and Japanese paintings, copybooks, and the like, he became an expert at depicting monkeys, without having ever seen a live one. Not until 1809, that is, when a live gibbon was brought to Japan for the first time, and Mori had the opportunity to paint the creature from life.