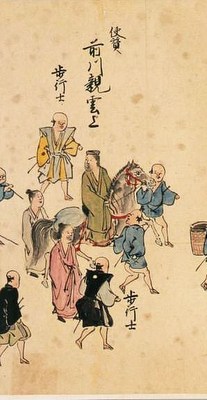 Maekawa peechin as seen in a 1710 handscroll painting depicting the Ryukyuan procession up to Edo castle. University of Hawaii, Hamilton Library, Sakamaki-Hawley Collection

Maekawa Chôyû was a Ryukyuan scholar-official who served as a shisan on the 1710 Ryukyuan mission to Edo.

He was a seventh-generation descendant of Prince Urasoe Chôman, eldest son of King Shô Shin, and was named jitô of the Maekawa area of Tamagusuku magiri in 1686.

In 1705, he was elevated to high enough rank to be permitted to wear a purple court cap. A portrait of him painted that same year by Go Shiken appears in Kamakura Yoshitarô's 1982 book Okinawa bunka no ihô.