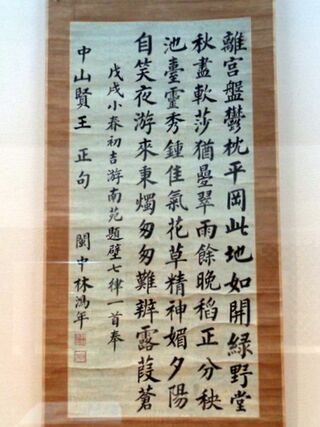 A work of calligraphy by Lin, given as a gift to King Shô Iku of the Ryûkyû Kingdom

Lín Hóngnián was a Qing Dynasty scholar-official, who served as the head of a Chinese investiture mission to the Ryûkyû Kingdom in 1838, for the investiture of King Shô Iku.

His vice-envoy on the 1838 mission to Ryûkyû was Gao Renjian. While visiting the Ryukyuan royal villa at Shikinaen, Lin gifted King Shô Iku a stone stele reading gān lǐ yán líng (甘醴延齢, "sweet saké, long life"), and a work of eight lines of calligraphy on paper. This work of calligraphy later came into the collection of Shô Masako, the sixth daughter of King Shô Tai, who donated it to the Ryukyuan Museum during the postwar Occupation period; it remains in the collection of the Okinawa Prefectural Museum today.