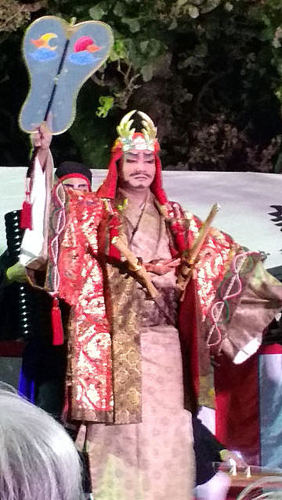 Kumi odori is a traditional Okinawan theatrical & dance form created originally as part of formal court entertainments for visiting Chinese investiture envoys. It was created originally by Minister of Dance (udui bujô) Tamagusuku Chôkun in 1719, and developed and flourished until the abolition of the Kingdom of Ryûkyû in 1879, but was revived beginning in the 1970s. Following the restoration of Okinawa to Japanese sovereignty in 1972, kumi odori was named an "important intangible cultural asset" by the Japanese government that same year. In November 2010, it was named an "Intangible Cultural Heritage" of the world by UNESCO.[1] It can now be considered in a category with other traditional Japanese performing arts, including gagaku, Noh, bunraku, and kabuki.

Like Japanese traditional dramas, which often draw extensively upon Japanese myths and stories, such as gunki monogatari, the plots and characters in kumi odori dance-plays are often pulled from traditional Okinawan legends and history, as seen in the Omoro sôshi and other oral and written histories.

Also as in traditional Japanese drama, all roles were originally performed only by men. Following the fall of the kingdom, however, and the revival of the form in the late 20th century, women now participate in kumi odori as well, playing both female and young male roles.

Kumi odori was first performed on 1719/9/9, at a banquet for the Chinese envoys on the occasion of the investiture of King Shô Kei. It was the day of the annual chrysanthemum viewing festival, and two dance-plays were performed: Nidô Tichiuchi (The Vendetta of the Two Sons) and Shûshin Kani'iri (Possessed by Love, Thwarted by the Bell).

Tamagusuku Chôkun had served as the royal dance minister (udui bugyô) since 1715, and had traveled to both Edo and Kagoshima at least five times before then, during which time he became quite familiar with Noh plays and perhaps viewed kabuki or other arts as well. He is considered the author of the first five kumi odori dance-plays, commonly known as "Chôkun no Goban" or simply the "Goban," all of which are relatively short and strongly influenced by Noh.

While kumi odori continued to be performed for Chinese envoys up until the abolition of the kingdom, it also quickly came to be performed within the Ryukyuan aristocratic community as well, both in full stage performance and in oral recitation alone.

The form came into peril following the dissolution of the kingdom, and with it the aristocratic class and lifestyle. Kumi udui was no longer restricted to the court or the aristocracy, and could now be performed and viewed more widely; however, its survival rested on performers maintaining the traditions, and on audiences continuing to show interest. Attempts in the early 20th century to maintain it as a more popular artform failed, as that which was performed for the masses transformed by 1919 into a different form, known as Okinawa shibai or kageki ("musical theatre"). However, traditional kumi odori continued to be practiced and passed on by a number of families, and was revived beginning in the 1970s. The National Theatre Okinawa opened in 2004, and the early 2000s have also seen performances at gusuku (castle) sites, as well as the composition of new plays.

Practitioners of Kin Ryôshô's school of dance contend, however, that even the kumi udui performed at the National Theatre Okinawa is more shibai-influenced in style, and that their school maintains forms more accurate to those performed at the royal court, continuing the legacy of the truer "Shuri style."[2] In this Shuri style, lines are often spoken in a Shuri dialect rather than being chanted; further, there are slight differences in posture, hand movements, and so forth between this Kin/Shuri style and what has become the more widespread standard kumi udui style in Okinawa. Kin Ryôshô was named a Living National Treasure for his role as a bearer of this tradition, which is no longer performed in Okinawa. Cheryl Nakasone, head of the Hawai'i branch of the Jimpû Kai Kin Ryôshô Ryûkyû Geinô Kenkyûsho, maintains the Kin family teachings and Shuri-style of dance through her school in Honolulu. They performed Shuri-style dance at the National Theatre Okinawa in 2015, bringing this style back to the island.[3]

The form features a small stage and sparse set design inspired by Noh; the earliest plays likewise show strong Noh influences, but scholar Kathy Foley points out that while Noh plays often center around a character remembering the past, kumi odori tend to focus on the present[4]. In addition, the fundamental philosophy underlying the plays' themes is Confucianism, not Buddhism as it is in Noh.

In Kumi odori, performers generally do not wear masks, but maintain a neutral facial expression as though they were; they do express themselves, however, through their eyes. Movements are slow and considered, as in Noh, but again are very much informed by Ryukyuan court dance and other native movement forms.

Roles are generally divided into three general types - women (wunna), men (nisu wutuku), and young men (wakashu) - though not all roles strictly follow the movement styles and other attributes associated with any one given type. Women characters generally move more gracefully and smoothly, while male characters move more abruptly. Scholar Kathy Foley describes three levels of dance as well, from realistic, literal actions to those exaggerated to emphasize emotion, to those which might be considered more purely to be "dance" rather than acting.

Lines are sung or chanted in stylized forms particular to kumi odori. They often follow Ryukyuan poetic meters and forms, and are written in formal, traditional Okinawan language, laced with poetic imagery and metaphor.

Dance-plays are accompanied by a musical ensemble including koto, flute, kûchô, and drum players, and led by a sanshin player who also sings as background to dances and in other sections where a song replaces dialogue in relating the plot and plays an important role in conveying mood and emotion.

The square kumi odori stage shares many features with that of Noh, but is different in various ways as well. A bingata cloth called himatsi, painted with a pine tree and red sun, serves as the backdrop. Actors enter and exit from behind the himatsi on stage left, or via a bridge on stage right. Musicians are sometimes on stage, as in Noh, and sometimes hidden behind the curtain.

As in Noh, the stage is largely empty, with a minimum of set decoration or props.

Traditionally, a day's program would not consist of a single play, or a continual sequence of plays, such as we see in Noh or kabuki today. Rather, it would include two kumi odori plays, interspersed with court dances.

Though some new plays were written in 2001 by Ôshiro Tatsuhiro, the traditional extant repertoire is considered to consist of only 44 plays. They are divided, like kabuki plays, into sewamono ("domestic plays") and jidaimono ("period plays"). The former tend to revolve around themes of love, filial piety and the like, while the latter very frequently are tales of revenge.