Difference between revisions of "Kumamoto garrison" 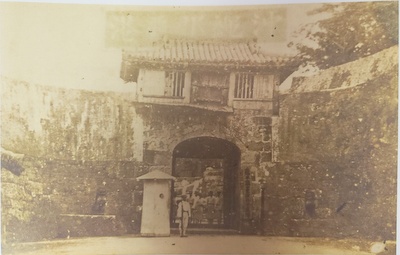 The Kumamoto garrison was a garrison of soldiers of the Imperial Japanese Army stationed in Naha and Shuri from 1876 to 1896. Originally based at a set of barracks in Kohagura village in or just outside Naha City, they occupied Shuri castle beginning in 1879.

It was first decided in May 1875 that troops would be stationed in Ryûkyû "to protect the domain."[1] The first group of soldiers from Kumamoto prefecture were sent to Ryûkyû han by the Ministry of the Interior in 1876. This was done in response to the dispatch of a Ryukyuan tribute mission to Beijing, in part as a punitive action against the Ryukyuans, and partially in the name of law enforcement and to ensure peace and order in the islands. This first group of soldiers numbered only 25, arriving on 1876/9/3, and were housed in a new set of barracks built for the purpose, covering an area of roughly 18,000 tsubo in the town of Kohagura. This was the first Japanese military installation to be established in the Ryukyu Islands. It included not only barracks, but also grounds for training drills, a hospital ward, officers' residences, and, in the suburbs a short distance away, military exercise fields.

Four hundred more soldiers from Kumamoto arrived on 1879/3/25, accompanying Matsuda Michiyuki, who delivered to the former royal authorities of the Ryûkyû Kingdom formal orders from Tokyo that their domain (redesignated "Ryûkyû han" and no longer a kingdom in 1872, with the king as "lord" and no longer king) was declared dissolved. Shô Tai vacated the castle on 3/30, and the Kumamoto garrison immediately took up occupation.

The garrison remained at Shuri castle until July 1896, roughly a year after the end of the Sino-Japanese War. They were reassigned from the camp at Kohagura as well, which was turned over to use for agricultural experiments. The government then sold the site to Mawashi village in 1909, but Mawashi offered a 4,000 tsubo portion of it back to the military in 1928, who used it for training drills and exercises. During the American Occupation, the Occupation forces kept gasoline tanks on the site; following the end of the Occupation in 1972, the entire area was rezoned and became a residential area.