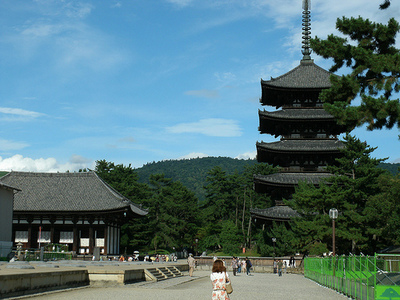 The pagoda at Kôfuku-ji, with the Eastern Kondô visible at left.

Kôfuku-ji is a major Buddhist temple in Nara, and a World Heritage Site. It is the head temple of the Hossô sect, and one of the oldest temples in the country. At various times in history, the temple exerted immense political power. It contains the second-tallest pagoda in the country, and numerous National Treasures.

The temple was founded in 669 by Kagami no okimi in what is today the city of Kyoto; her husband, Fujiwara no Kamatari, was ill, and it was hoped that such a gesture would bring his recovery. The temple was originally named Yamashina-dera, but was later renamed Umayasaka-dera and moved to Asuka. The temple was then moved by Kamatari's son, Fujiwara no Fuhito, to its current location following the establishment of Nara (Heijô-kyô) as the imperial capital in 710, and re-established more explicitly as a Fujiwara clan temple. The site was at that time part of the gekyô, or "lower city," on the eastern edges of the city. Prior to the construction of Tôdai-ji, which began in 747, Kôfuku-ji was easily the largest Buddhist temple in the country. It occupies 16 city blocks on a flat area at the foot of Mt. Mikasa, while Yakushi-ji and Gangô-ji only took up nine. Tôdai-ji, however, takes up 64 blocks. The Fujiwara also established a family shrine, Kasuga Taisha, nearby, further up the mountain. The temple served not only as a monastery, but also included facilities for tending to the sick and needy.

The original compound, as constructed beginning in 710, was entered via a Nandaimon ("southern great gate") to the south, and then via a Chûmon ("middle gate") to the north of that. The compound centered on a Chûkondô ("Central Golden Hall") and kôdô (lecture hall), which were surrounded on three sides by a sutra repository, bell tower, and monks' quarters. The majority of the surviving buildings today are clustered in the eastern portion of the compound, to the east of this central area. However, the Central Kondô is currently being rebuilt, and is planned to reopen in 2018.

The temple's five-story pagoda was first built in 730; the current pagoda dates to a reconstruction in 1426. At 50.1 meters tall, it is the second tallest pagoda in the country, after that at Tô-ji in Kyoto. The pagoda stands to the east of the central area, and was originally accompanied by a Tôkondô ("Eastern Golden Hall"), refectory, and kitchens. The Nan'endô (southern octagonal hall) still stands to the west of the central area, along with a Hokuendô (northern octagonal hall); these were originally accompanied by a Saikondô ("Western Golden Hall"). The Hokuendô was constructed on the site of a memorial hall erected in 721 on the first anniversary of the death of Fujiwara no Fuhito. It contains a statue of Miroku (Maitreya), made to replace an earlier Miroku statue which was lost, and a pair of wooden statues by Unkei from 1212 depicting the arhats (rakan) Muchaku and Seshin. Statues of the Shitennô (Four Wisdom Kings) which once accompanied them have been lost.

A small hall on the grounds known as the Ô-mi-dô is normally said to have been built by the monk Genbô (d. 746), but in actuality, it was probably built for his memorial. The main image of worship is a seated Amida Nyorai (Kamakura period, Important Cultural Property); the hall also contains a standing Kannon statue. The bell hanging in the belltower was cast in 1436, and used to be rung 13 times a day - once for each of the twelve hours of the day, and once more in the morning to mark the beginning of going to work. The bell is thus known as "jû-san kane", or "the bell of 13." In the garden in front of the Ô-mi-dô is a grave mound for a boy who was stoned to death for harming one of the sacred Kasuga deer. In the Genroku period, Chikamatsu Monzaemon wrote a puppet play about this story, called "jû-san kane."

Along with that of Tôdai-ji and a few other major temples, the political influence of Kôfuku-ji is often cited by historians as one of the key factors inspiring the move of the imperial capital by Emperor Kammu away from Nara in 784.

Kôfuku-ji was destroyed in the Siege of Nara in 1181 by forces of the Taira clan, and was rebuilt in the early 13th century (that is, a few decades later). When Taira general Taira no Shigehira was captured by forces of the Minamoto clan later in the war, he was turned over to the temple, which had him executed. The reconstruction was funded in large part by Shogun Minamoto no Yoritomo. Sculptors of the Kei school played a major role in replacing devotional sculptures lost in the fire, and in producing new ones for the temple.

The temple came under attack again in the Sengoku period from Ikkô-ikki mobs, but was not destroyed as completely.

The Treasure House at Kôfuku-ji is today a museum, open to the public for a small fee, and equipped with modern conservation & display technologies and museum techniques. It contains numerous National Treasures, along with many other major treasures. They include: