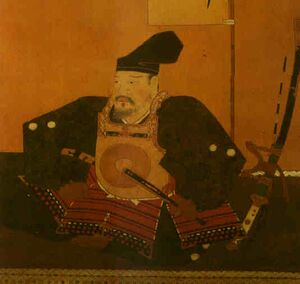 Katô Kiyomasa (also known as Toranosuke) was born the son of a blacksmith in Nakamura, a village in Owari that supposedly also produced Toyotomi Hideyoshi. Though often described as a boyhood friend of Hideyoshi, this is unlikely, given the age difference between the men. Nonetheless, he became a retainer of Hideyoshi and distinguished himself at Shizugatake in 1583, where he became known as one of the 'Seven Spears' of that battle. He participated in the Kyushu Campaign in 1587 and fought at the Battle of Sendaigawa, where he engaged in single combat with the noted Shimazu general Niiro Tadamoto. After the island was secured, Katô received a sizable fief in Higo province worth 250,000 koku. Almost immediately, the fanatically Nichiren Kiyomasa began a persecution of Christians in his domain, which brought him into conflict with his next-door neighbor, the Christian Konishi Yukinaga. It so happened that both men received posts commanding armies in Hideyoshi's invasion of Korea in 1592. Katô was to drive north on the eastern side of the peninsula after he and Konishi took Seoul and Konishi moved on to Pyongyang. As aggressive as any general in Hideyoshi's command, Kiyomasa made good time, actually stepping onto Chinese soil briefly at the Tumen River. On the other side of Korea, however, Konishi had run into the Chinese army and fought pitched battles for Pyongyang even as Korean partisans and the Korean navy were wreaking havoc on the Japanese supply lines. In 1594 Hideyoshi began the process of arranging a truce with the Koreans and Chinese and ordered Kiyomasa (much to the latter's frustration) to withdraw from the north. In June he joined forces with Konishi to capture Chinju, a Castle west of Pusan Hosokawa Tadaoki had failed to take the year before. Soon afterwards, the cease-fire came into effect, one of the provisions of which was that Katô had to release two Korean princes he had captured in the north. In 1597 Hideyoshi ordered that offensive operations commence in Korea, and again Japanese troops marched north, although not nearly with the same rapidity they had in 1592. In the fall of 1597 Katô and Asano Yukinaga found themselves surrounded by a Chinese army at Ulsan castle, an important post 60 km north of Pusan. Katô and Asano held out in ever-worsening conditions (with their men reduced to the proverbial eating of bark) until for months until a relief operation lifted the siege.

After Hideyoshi died in 1598, both Tokugawa Ieyasu and Ishida Mitsunari courted his support. Ishida's so - called Western forces might well have gotten themselves a formidable warrior were it not for two factors that decided Kiyomasa, otherwise a Toyotomi loyalist. Firstly - the Western forces were led by Ishida Mitsunari, whom Katô loathed as a civilian interloper and had quarreled with during the Korean campaign; secondly, the Western forces included Konishi Yukinaga. Although Konishi's navy had aided Kiyomasa quite a bit at the Siege of Ulsan, the two men despised each other as much as ever. Katô joined with Tokugawa and during the Sekigahara campaign (August-October 1600) fought Ishida's allies on Kyushu and took a number of Konishi's castles. He was preparing to invade the Shimazu domain when the campaign ended and Ieyasu ordered him to stand down. For his service, Katô was awarded the other half of Higo (formerly owned by Konishi - executed in the wake of Sekigahara), bringing his income to nearly 500,000 koku. 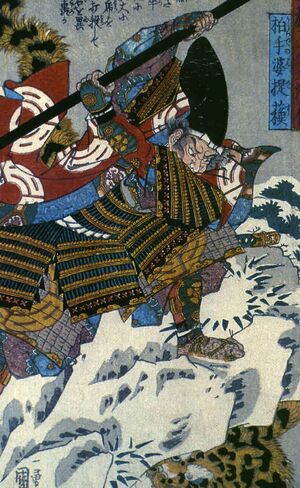 Katô Kiyomasa fighting a tiger in the mountains of Korea.

Kiyomasa passed on in 1611, and it is often speculated that Tokugawa Ieyasu arranged his death. Katô was a friend to Toyotomi Hideyori - Hideyoshi's son - and this made him a potential stumbling block in Ieyasu's plan to undermine this last threat to the Tokugawa shogunate. At the same time, a disease-the 'Chinese pox', as it was called-was making the rounds, and had already claimed a number of well-known lords (such as Honda Masanobu and Kuroda Kanbei). It is therefore difficult to even speculate on whether the disease provided the cause of Kiyomasa's death or a cover-story for it. His son, Tadahiro (1597-1653) was later on accused of treason against the Shogun Tokugawa Iemitsu and was banished-a possible clue to the fall of Katô Kiyomasa.

A ferocious fighter and often ruthless, Katô Kiyomasa was a warrior, nothing more, nothing less. He wrote to his followers later in his life that poetry and dancing were shameful pastimes for a samurai, and ordered anyone who found himself engaged in the latter to commit suicide. His cruelty and love of combat (for sport, he hunted tigers with a spear in Korea) earned him the nickname Kishokan, or, 'Devil General'.