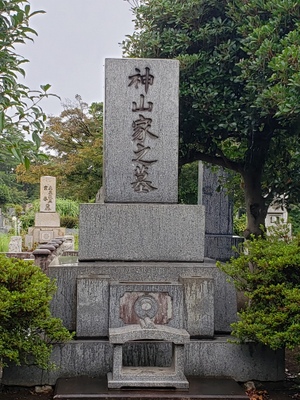 Born in Tira-chô, Shuri, Okinawa, he attended Tokyo Imperial University, graduating from the law school in 1909. Two years later, he traveled to England with Marquis Shô Shô to study politics and economics at Oxford University. Returning to Japan in 1915, he was granted a position in the Ministry of Finance. In 1931, he became head of the Nagoya Government Monopoly Office; he was reassigned to the equivalent Tokyo office the following year.

Kamiyama resigned from government service in 1936 and became the head of the Kyoto Okinawa kenjinkai (association of people from Okinawa prefecture), leading efforts to promote development in Okinawa. He later became head of the equivalent association in the Tokyo/Kantô area. Kamiyama married a daughter of Shô Tai, the last king of the Ryûkyû Kingdom; a number of lacquerwares and other items associated with the royal family and owned by the family are now held at the Naha City Museum of History as the Kamiyama ke shiryô (Kamiyama Family Materials).[1]

After the end of World War II, Kamiyama became the head of several different Okinawan associations, including the Okinawa sokoku fukki sokushin kyôgikai 沖縄祖国復帰促進協議会 (Council for the Advancement of the Reversion of Okinawa to the Home Country), contributing to negotiations with the national government to try to bring about the end of the Occupation in Okinawa and the reversion of Okinawa to inclusion within the Japanese state.