Difference between revisions of "Inoue Kaoru" 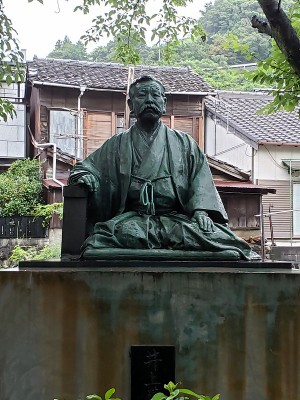 Statue of Inoue at Okitsu, in Shizuoka City.

Inoue Kaoru was a prominent and influential official in the Meiji government, serving as Deputy Finance Minister for a time in the 1870s, and as Foreign Minister for much of the 1880s, before resigning that post in the wake of criticism for his handling of treaty revision negotiations.

He played a key role in commissioning or overseeing the renovation of the Enryôkan in preparation for the 1879 visit of Ulysses S. Grant, and the design and construction of the Rokumeikan (completed 1883). Inoue was head of the Ministry of Public Works (Kôbushô) in 1878, and became Foreign Minister in 1879. After the Ministry of Public Works was abolished in 1885 and replaced with the Temporary Architecture Department (Rinji kenchiku kyoku, 1886-1890), he arranged to oversee that department in addition to his responsibilities as foreign minister. It was in that role that he also hired the German firm Ende-Boeckmann to design a number of important government buildings, including the National Diet Building, High Court, and Ministry of Justice.[2]

Inoue traveled to Korea in 1884, accompanied by Durham Stevens, to address recent attacks on Japanese nationals in Korea, including an attack on Japanese ambassador to Korea Takezoe Shinichirô.

In April 1887, he hosted at his home the first ever kabuki production to be performed before the Emperor. The private performance starred Onoe Kikugorô V, Ichikawa Danjûrô IX and Ichikawa Sadanji I.

In his role as Foreign Minister, Inoue engaged in negotiations with representatives of the Western powers, seeking revisions of the Unequal Treaties; these negotiations began in 1882 and continued until 1887, when they fell through. In the wake of being severely criticized within Japan for offering certain concessions, Inoue resigned his post that September.

Inoue's daughter Inoue Sueko served as interpreter for the Empress on the occasion of the visit of King Kalakaua of Hawaii in 1881, as well as presumably on other occasions. His son, Inoue Katsunosuke, also served as a government official, traveling for example to Hawaii in 1885 as a special commissioner to investigate allegations of brutal treatment of Japanese contract laborers there.[3]