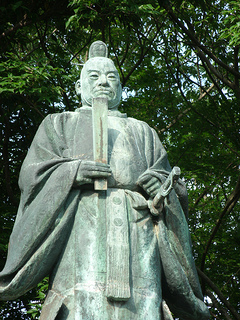 Ii Naosuke was a prominent Tairô of the Bakumatsu period, known for his support of ending the maritime restrictions of the Edo period and "opening" the country, and for his engineering of the Ansei Purges in which he purged from the government a great many shogunate officials belonging to rival factions.

Naosuke was born the fourteenth son of lord Ii Naonaka, by a concubine known as Otomi no kata. Born at the Keyakigoten, the lord's private residence within Hikone castle, at the age of 17, Naosuke was given a separate residence, known as Umoreginoya, where he would then spend the next fifteen years of his life. During this period, he devoted himself to cultural study and practice, including the study of tea under Katagiri Sôen (1774-1864). Towards the end of his time at the Umoreginoya, he established his own branch of the Sekishû school of tea culture, producing numerous writings on his philosophies on tea and the arts. These texts reveal an attitude of disappointment or sadness at the decline of daimyô styles of tea (in the vein of that supposedly practiced by warlords such as Toyotomi Hideyoshi and Tokugawa Ieyasu), and the decline of warrior spirit overall. Within tea practice, Naosuke emphasized the value of ichigo ichie (once-in-a-lifetime experiences), and of sitting alone in meditation. Naosuke is said to have also valued the inclusion of women in tea culture more than most, and actively encouraged female members of his household to learn and practice tea. This encouragement included the production and distribution of manuscript copies of Toji no tamoto (1721), one of the earliest guidebooks to tea for women; he also had Katagiri Sôtetsu, the wife of his own teacher, instruct the women of the Ii household in tea practices.[1]

Naosuke's adoptive mother was known as Yôkyô-in. His wife was named Masako. Naosuke had several concubines, and several children, including Yachiyo (a daughter by the concubine Shizu) and Yoshimaro (a son by another concubine, Sato).[1]

In 1846, he was named heir apparent to the Ii household, and four years later, at the age of 36, Naosuke became head of the Ii family and lord of Hikone han. He was named Tairô on 1858/4/23,[2] and was a strong supporter of Hotta Masayoshi's having negotiated and agreed to the Treaty of Amity and Commerce (Harris Treaty).

Among his many activities as Tairô, in addition to the Ansei Purges, Naosuke pushed for Tokugawa Iemochi, lord of Wakayama han, to be named successor to the critically ill Shogun Tokugawa Iesada over Tokugawa Yoshinobu, head of the Hitotsubashi family, and restored Manabe Akikatsu to the rôjû after dismissing Hotta Masayoshi from the position.

Naosuke was killed by Mito han loyalists outside the Sakuradamon (Sakurada Gate) of Edo castle on 1860/3/3, in what is known as the Sakuradamongai no hen or Sakuradamongai Incident. Following his death, in accordance with common practice after the death of a lord, heirloom swords and other treasured possessions of Naosuke's were distributed to certain prominent lords (including close relatives), as "reminders" or "relics" of the late lord.[3]

He was succeeded as lord of Hikone by Ii Naonori.[4]

Former retainers of Hikone domain proposed that a statue of Naosuke be erected in 1881, but the Meiji government had declared Naosuke a "traitor to the Court," and was squarely opposed to celebrating him in such a fashion. By 1909, however, attitudes had changed, and the government was now supportive of celebrating figures such as Naosuke who helped "open" up Japan; a statue was erected of him in Yokohama in what is now known as Kamon-yama Park, after Naosuke's honorary title Kamon-no-kami.[5]