Difference between revisions of "Himeji castle" 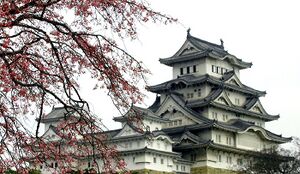 Himeji castle is among the largest and most famous of the castles which survive from the Edo period. Originally built by Ikeda Terumasa, it later became the home of the Sakai clan lords of Himeji han from 1749 onward.

The main keep has five stories on its exterior, and seven floors inside. Known as a "coalition-style" or renritsu shiki keep, it is connected to three smaller keep towers by covered passages.

This article is a placeholder or stub. You can help SamuraiWiki by expanding it.
Retrieved from "http://samurai-archives.com/w/index.php?title=Himeji_castle&oldid=39911"
Categories: