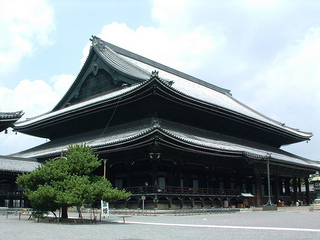 Today the head temple of the Shinshû Ôtani sect, Higashi Honganji was split off from the Honganji (now called Nishi Honganji) in 1602. It remains today one of the most famous and prominent temples in Kyoto.

After the complex was destroyed by fire in 1895, it was rebuilt. Few if any of the current buildings date back before then.

A branch temple in Asakusa, Tokyo, also identified as "Higashi Honganji" on the site outside its gates, is the chief Shinshû Ôtani temple in the Kantô region.