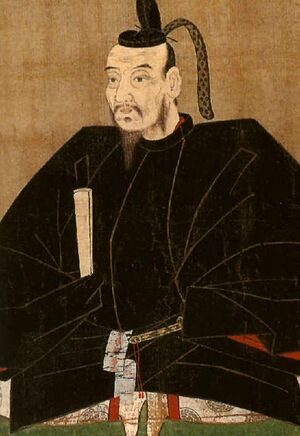 Daimyô of the Chosokabe family and eventual vassal to Toyotomi Hideyoshi, Motochika rose to rule Tosa and, for a short time, the whole of Shikoku. The Chosokabe were respected Jito (deputy administrators) of Tosa from the 12th century and entered the 16th Century as vassals of the Ichijô Clan, who were based in western Tosa.

Motochika was born at Okô castle in the Nagaoka district of Tosa, the eldest son of Chôsokabe Kunichika (1503-1560). Motochika was a quiet youth and his father was said to have fretted about the boy's gentle nature (he seems to have been nicknamed Himewako, or 'Little Princess' by his father's vassals); Kunichika's worries evaporated when Motochika later proved himself a skilled and brave warrior during his first battle against the Motoyama clan in 1560, at the Battle of Tonomoto.

When Motochika came of age, his father had already begun to draw away from the Ichijô, and Motochika would carry on his work. With his defeat of the locally powerful Motoyama at the Battle of Asakura and by forming alliances with local families, Motochika was able to build his power base on the Kôchi Plain. While being careful to remain ostensibly loyal to the Ichijô over the next few years, Motochika's power grew to the extent that he was strong enough to march on the rival Aki clan of east Tosa with 7,000 men and bring them to bear in 1569. In the course of the decade he was awarded a court rank (Kunai no shô) and was sufficiently confident after the reduction of the Aki to finally turn on the Ichijô. While still lord of the Hata district of Tosa, Ichijô Kanesada (1542-1585) was unpopular and had already suffered the defection of a number of important retainers. Seizing the opportunity, Motochika wasted no time in marching on the Ichijô's headquarters at Nakamura and in 1573 Kanesada fled to Bungo, defeated. The Ôtomo later supplied Kanesada with a fleet and he returned in an expedition which the Chôsokabe easily crushed. The twice defeated Ichijô daimyô submitted to Motochika and was allowed to go into exile on an island off Iyo province - only to be assassinated in 1585, presumably on Motochika's orders. 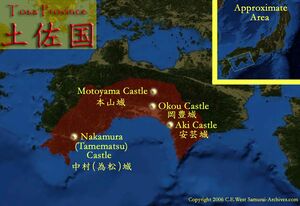 Motochika was now sole ruler of Tosa, but pressed onwards. One of the problems the Chôsokabe were faced with was the very territory they possessed. It was poor, and Motochika was hard-pressed to when it came to decent tracts of land to dole out as rewards to his men. This as much as his own ambitions propelled him towards domination of the whole island.

Following his conquest of Tosa, Motochika turned north and prepared for an invasion of Iyo. The lord of that province was Kôno Michinao, a daimyo who had once been driven from his domain by the Utsunomiya clan, returning only with the assistance of the powerful Môri. It was unlikely that Kôno could count on that sort of help again, however-presently the Môri were embroiled in a war with Oda Nobunaga. Nonetheless, Chosokabe's campaign in Iyo did not go off without a hitch. In 1579, a 7,000-man Chosokabe army, commanded by Hisatake Chikanobu, attacked the strongest fortress in Southern Iyo, Okayama castle, held by Doi Kiyoyoshi. During the ensuing siege of Okayama castle, Chikanobu was shot and killed by an arquebus and his army defeated, though the loss proved little more than an unfortunate delay. The next year, Motochika led some 30,000 men into Iyo, and forced Kôno to flee to Bungo province. With little interference from either the Môri or the Ôtomo, Chosokabe was free to press onwards, and in 1582 he stepped up ongoing raids into Awa and defeated the Sogo clan. By 1583, Chosokabe troops had subdued both Awa and Sanuki, making Motochika's dream of ruling all of Shikoku a reality.

Sometime around 1579, Motochika entered into communication with Nobunaga, whom he fancied an ally. For his part, Nobunaga appears to have humored Motochika, though in private he referred to him as 'a bat on a birdless island' and planned to take Shikoku at some point (in fact naming his son Nobutada commander of the future invasion). This was averted by Nobunaga's death in 1582, and Motochika, whether he was aware of it or not, was given a new lease on life. By now he was something of a national power and became involved in the struggle between Toyotomi Hideyoshi and Tokugawa Ieyasu the following year. He promised the latter support, though made no direct moves to that end. Hideyoshi, to make sure, sent Sengoku Hidehisa (1551-1614) to block any efforts on Motochika's part, though these troops seem to have been roughly treated by the Lord of Shikoku upon arrival on the island. The so-called Komaki Campaign between Hideyoshi and Ieyasu ended in a peace treaty, which bode ill for Chosokabe. In May 1584 Hideyoshi ordered a full-scale invasion of Shikoku, spear headed by 30,000 troops from the Môri clan and 60,000 more under Hashiba Hidenaga. Evidently, the late Nobunaga's assessment of the Chosokabe was accurate enough, for the invaders found a small army with such equipment as was available in poor condition. After desultory resistance, Motochika expressed a desire to negotiate. Hideyoshi's terms were generous. Motochika would get to keep his head and his hard-earned province of Tosa, an offer Motochika did not feel inclined to refuse.

In 1587 Motochika was called upon for Hideyoshi's invasion of Kyushu, becoming part of an advance force alongside, ironically, Sengoku Hidehisa. Their mission was to augment the besieged Ôtomo clan of Bungo, whose request for assistance had provided Hideyoshi with the pretext for invasion. Despite Motochika's sage advice on the scene, Ôtomo and Sengoku ignored their orders to adopt a defensive stance, and attacked the encroaching Shimazu forces in the Battle of Hetsugigawa. The allied troops were soundly defeated, and in the process, Motochika suffered the death of his beloved son and heir, Nobuchika (1565-1587). Hideyoshi praised Motochika's sober thinking, and offered him Ôsumi (once it had been taken) as compensation for his loss, which Motochika respectfully declined. In 1590 Motochika led a naval contingent in support of the Siege of Odawara, and in 1592 commanded 3,000 troops in the invasion of Korea, being commended for his leadership once again. When he returned from Korea, he retired to Fushimi and took up a monk's habit. He passed away on 11 July 1599.

In addition to his leadership, Motochika is remembered for his 100-Article Code of the Chosokabe and his struggle to found an economically strong castle town, moving in the course of his career from Oko to Otazaka and on to Urado. However, the troubles caused by his naming of Morichika as heir did much damage to the Chosokabe house. After Nobuchika's death in battle, Hideyoshi suggested that Motochika's second son, Chikakazu, be made heir to the Chosokabe house. Motochika demurred and instead settled on Morichika, his fourth son. Deeply embittered, Chikakazu withdrew from public life and died of illness in 1587. In fact, Motochika had been concerned that Chikakazu was not physically capable of assuming command of the family. Motochika's third son, Chikatada, also passed over, openly objected. Morichika's ally, Hisatake Chikanao, agitated against him and in 1599 Chikatada was confined to a temple under guard. The following year, Chikatada was accused of colluding with the Tokugawa and was put to death. This provided Tokugawa Ieyasu with another pretext to strip the Chosokabe of their domain.

The Chosokabe were served by the Kosokabe, Kira (both of whom were led in Motochika's time by his brothers), Yoshida, Kumu, Kagawa (into which Motochika adopted a son, Chikakazu), Yumioka, and others.