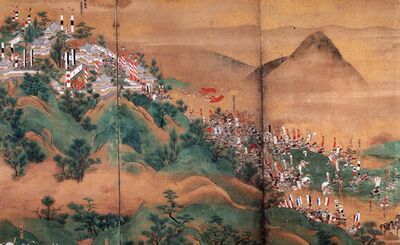 Following the death of Oda Nobunaga, Shibata Katsuie and Hashiba (Toyotomi) Hideyoshi grew openly hostile, and in late 1582 Shibata's ally Oda Nobutaka declared war on Hideyoshi. While Oda was easily forced into submission, Shibata dispatched Sakuma Morimasa from Echizen province into northern Omi to reduce Hideyoshi's forward outposts there. Katsuie soon became leery of the whole business and called for Morimasa to pull back - without effect. Sakuma had taken Iwasakiyama and was attempting to capture Shizugatake when Hideyoshi suddenly arrived and soundly defeated the surprised Shibata force. Katsuie commited suicide in Echizen when news of the defeat reached him. A number of future Toyotomi greats made their debut at this battle, including Fukushima Masanori and Kato Kiyomasa, both of whom won glory as members of the 'seven spears' of Shizugatake.

Following his victory, Hideyoshi was elevated to the Fourth Rank, and was named sangi, or "Imperial advisor."[1]