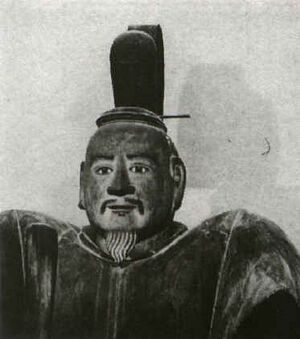 A carving of Ashikaga Yoshiaki.

At the time of Ashikaga Yoshiteru's murder in 1565, Yoshiaki was known as Kakukei, the abbot of the Ichijoin in Nara. Learning of his elder brother's death Yoshiaki left his position at the monastery with the aid of Hosokawa Fujitaka. Yoshiaki made it known that he intended to succeed his brother, whose post was now being filled by a 2-year old child, the puppet Ashikaga Yoshihide. To realize these hopes, however, Yoshiaki would need a patron, and to this end he approached through letters the Takeda of Wakasa and the Uesugi of Echigo, among others-to no avail. In 1566 he went to Echizen and accepted the protection of Asakura Yoshikage, who promised to help Yoshiaki as soon as possible. After a year, however, Yoshikage finally admitted that he was powerless to be of any assistance and Yoshiaki looked elsewhere. By now, Oda Nobunaga had taken Mino, and word of his skill and ambition reached Yoshiaki, who dispatched Hosokawa to ask for his help. Unlike Asakura, Nobunaga responded enthusiastically. On 7 October 1568, Nobunaga marched on the capital and on the 26th entered Kyoto after accepting Matsunaga Hisahide's surrender. In mid-November the Emperor Ogimachi formally acknowledged Yoshiaki as the new Shogun. Almost immediately, Yoshiaki and Nobunaga began to quarrel. Nobunaga had no intention of being anything less than his own man, and ignored Yoshiaki's suggestion that he take the rank of Vice-Shogun (Kanrei) and proceeded to issue documents curtailing the shogun's authority (dated 30 January 1569 and 27 February 1570).

Perhaps unsurprisingly, it would be Yoshiaki's turn to become the puppet, and, like Yoshiteru, he would resist this role. During 1570 to 1573 he is said to have conspired against his champion, sending secret letters to Takeda Shingen, Mori Motonari, and the Asai and Asakura. While scholars debate on the extent to which Yoshiaki actually worked against Nobunaga, it would seem that his hopes were riding on Takeda Shingen. In fact, one of the few surviving letters that seems to support the conspiracy theories surrounding Yoshiaki is addressed to Shingen and signed by Yoshiaki himself (June 1572). Initially, Shingen did not disappoint. In December of 1572 he defeated allied Oda and Tokugawa troops in Totomi (at Mikatagahara) and entered Mikawa in the spring of 1573. Perhaps emboldened by Shingen's activities, Yoshiaki openly broke from Nobunaga in March, fortifying Nijo Castle and urging the Asai and Asakura to make renewed efforts. Unfortunately for Yoshiaki (and his immediate allies), the 'Tiger of Kai' was not destined to challenge Nobunaga directly. Shingen passed away on 12 May, and while the Takeda endeavored to keep his death a secret, Nobunaga had at least suspected something was wrong. Moving quickly, Nobunaga had already surrounded Kyoto (3 May) and forced Yoshiaki, who had been caught completely off-balance, to negotiate. The Emperor interceded, and for the time being an uneasy truce of sorts existed between Oda and Yoshiaki. In August, Yoshiaki again defied Nobunaga, and, leaving Nijo in the hands of Mizubuchi Fujihide, set up camp in a stronghold near the Uji River (Makinoshima). Yoshiaki had hoped to tie up Nobunaga long enough for his allies to intercede (Makinoshima was a formidable defensive location), but by 18 August spirited attacks by the Oda had forced Yoshiaki into submission. Yoshiaki pleaded for his life-a request Nobunaga granted - but was never again to play a role in Kyoto politics. Nobunaga drove the last Ashikaga shogun into exile, forcing Yoshiaki to seek shelter on Shikkoku. For years hence, Yoshiaki would present himself to various daimyo opposed to Nobunaga and implore them to restore the Ashikaga. Needless to say, he received no takers, and ultimately he settled down in the western provinces.