Akechi Mitsuhide was a prominent retainer to Oda Nobunaga, who is famous for betraying him and leading armies against him in the 1582 Incident at Honnô-ji, in which Nobunaga was killed. 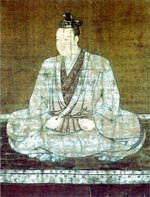 The son of Akechi Mitsukuni (who had held Akechi castle in east Mino province), Mitsuhide first spent ten years as an unaffiliated warrior in Wakasa province around 1557 to 1567. He served the Saitô of Mino province for a time, and later Asakura Ujikage of Echizen. In 1566 Mitsuhide is supposed to have acted as a messenger for the 'wandering shôgun' Ashikaga Yoshiaki, and thereafter served Nobunaga. Mitsuhide proved himself a capable general and in 1571 was awarded Sakamoto castle and two districts in Ômi province. When Nobunaga went to war with the Môri clan, Mitsuhide was assigned to lead the Oda contingent that would be marching along the northern coast of the Chûgoku arm. He invaded Tamba, where he subdued the Hatano, and Tango, where he clashed with the Isshiki family.

For years a fictional story involving the Hatano brothers was accepted as one of the primary reasons for turning Mitsuhide against Nobunaga. In 1578 an unfortunate incident is said to have occurred involving the Hatano clan of Tamba. Eager to bring them over without further delay, Mitsuhide managed to convince Hatano Hideharu to submit. Unfortunately, Nobunaga later overturned Mitsuhide's promise of safe treatment and had Hideharu executed in 1579. The Hatano responded, as one might expect, by accusing Mitsuhide of treachery. As the story goes, they had received Mitsuhide's mother as a hostage and executed her in dreadful manner. Mitsuhide, needless to say, would have bore Nobunaga some ill will. However, the story has been traced to an Edo period play and there are letters showing that Mitsuhide's mother was still alive in 1581. In addition, there are records of the Hatano brothers having been removed by their own troops. Somewhat better documented are a series of public insults Nobunaga directed at Mitsuhide that drew even the attention of Western observers. Nonetheless, Mitsuhide was generally well regarded for his talents both on the battlefield and as an administrator.

In 1582, Nobunaga ordered Mitsuhide to assemble his troops and march to the west, where Hashiba (Toyotomi) Hideyoshi was embroiled in a struggle with the Môri. Instead, Mitsuhide marched on Oda, who was occupying the Honno temple at the time. Nobunaga and his heir Nobutada were killed, and Mitsuhide declared himself the new shogun, however improbably. Mistuhuide may have intimated his intentions just days before when he composed a poem for the renga masters Jôha and Shoshitsu that, while ostensibly written to bring good luck to Hideyoshi's Siege of Takamatsu, contained a provocative line that could be interpreted to mean that the Toki (whose name he used from time to time) would rule Japan. At any rate, the sudden defection stunned the Capital region. Akechi worked as quickly as he could, and looted Azuchi Castle so as to reward his men and made friendly gestures towards a bewildered Imperial Court. The Akechi could claim descent from the Toki, and in turn the Minamoto, but, unsurprisingly, this would bear little fruit. Mitsuhide had counted on the support of Hosokawa Fujitaka, with whom he was related to through marriage. This alliance did not pan out as Fujitaka wisely cut his ties with the usurper. It is possible that Mitsuhide also hoped for the support of the Tsutsui, whose relation with Nobunaga had been none too good. Tsutsui Junkei, however, wavered, and in the end joined Toyotomi Hideyoshi. Another grave setback came within days. Mitsuhide had counted on Hideyoshi being tied up with the Môri and thus being unable to promptly respond to Nobunaga's death.

Unfortunately, Hideyoshi learned of the assassination before the Môri, and signed a peace treaty with that clan. This allowed him to force-march back east at a rapid pace, catching Mitsuhide off guard. Mitsuhide and Hideyoshi clashed at Yamazaki and though the former fought bravely, his troops were defeated. Mitsuhide himself was killed while attempting to make his way to Sakamoto, which was held by his nephew, Hidemitsu (1560-1582). According to some accounts, Mitsuhide killed himself, with his head being recovered by some of his retainers, who buried it at a site near Chion-in in Kyoto, where a small set of stones and plaques still mark the spot today.[2] Soon afterwards, Sakamoto was reduced by Hori Hidemasa (1553-1590).

While Akechi would become one of the most famous men in Japanese history, if only for his treachery, the exact causes for his dramatic attack on Nobunaga, and what he hoped to accomplish once this was done, will most likely remain a mystery.