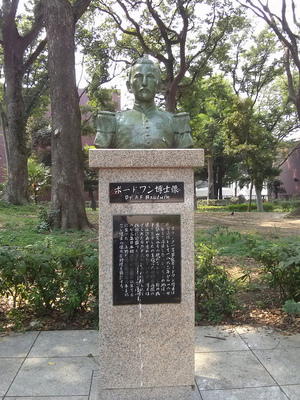 Bust of Bauduin at Ueno Park, erected in 1973 on the 100th anniversary of the establishment of the park

When the temple of Kan'ei-ji was destroyed in the 1868 Battle of Ueno, there were plans to build a hospital on the site, but Bauduin suggested that given the natural beauty of the place, it might be made into a public park. As a result, in 1873, Ueno Park was established as the country's first public park.