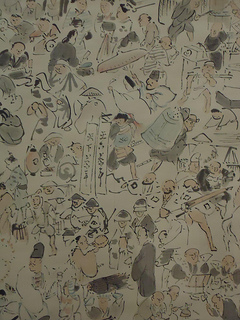 Kinkoku relocated a number of times over the course of his life, spending time in Kyoto, Osaka, Nagoya, Ômi province, and Nagasaki. A Buddhist priest early in his life, he left that life after his temple burned down, and turned to shûgendô, traveling and climbing mountains as a form of religious practice.

He later studied under Yosa Buson, and became prolific as a literati painter, as well as in a number of other arts.