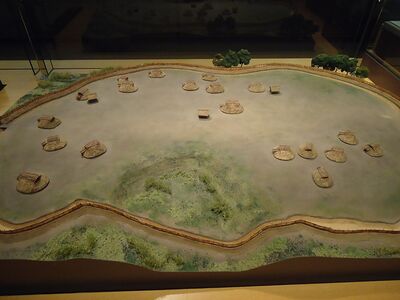 Model of a Yayoi period village, at the National Museum of Japanese History

The Yayoi Period is marked by the introduction of wet rice cultivation and certain other technologies, innovations in societal organization, and behavior, which accompanied an influx of new settlers into the Japanese archipelago. The period takes its name from a neighborhood in Tokyo where ceramic artifacts from this period were first discovered in 1884 by Tsuboi Shôgorô, Shirai Mitsutarô, and Akizaka Shôzô of the University of Tokyo. A museum and historical marker stand on the site today, just beyond the rear walls/gates of the university's main campus in Hongô.[1]

While theories surrounding horseriders from the Asian mainland, arriving via Korea, once were dominant, recent scholarship has cast doubt upon that argument. Debate continues as to whether the shift from Jômon to Yayoi was chiefly the result of mass migrations from the mainland, or of a looser form of cultural interactions and exchanges, though almost assuredly it was some combination of the two which occurred. Those who did migrate into the islands from the continent may have done so as a result of pressures from Chinese military expansion and conflict between China and the peoples to China's northeast. They came to Japan in oared boats, and continued to spread across the archipelago by boat, settling many parts of Kyushu and western Japan by around 200 BCE, reaching as far east as the area around what is today the city of Nagoya. The spread of Yayoi culture and people northward from there chiefly took place overland, and moved at a considerably slower pace, with Jômon culture remaining dominant in much of Tôhoku as late as the 1000s-1200s.[2]

Genetic tests have tentatively suggested that the Japanese people today are more similar genetically to modern-day Koreans, and to the Yayoi people, than to the Jômon people, though those from the far north and far south of Japan continue to show a greater proportion of Jômon genetic markers than do people from central Japan; such studies also suggest that the Ainu are particularly genetically similar to the Jômon people, albeit with some evidence of intermingling with the Yayoi population.[2]

Some scholars argue that rice cultivation was first introduced by people from the Asian mainland who first traveled to the Yaeyama Islands from the Jiangnan region of China (i.e. south of the Yangtze River basin) around 500-300 BCE, and who then made their way, via the Kuroshio current, to Kyushu.[3] Some sources point to earlier carbon dating evidence, and place the beginning of the Yayoi period several centuries earlier, possibly as early as c. 1000 BCE.[4]

Technologies including intensive agriculture, ironworking, and bronze casting, along with new techniques for weaving and woodworking, appear earliest in Kyushu, and are gradually seen to have spread north into the rest of the archipelago. Jômon culture persisted in Tôhoku and Hokkaidô for centuries afterwards, while the Ryûkyû Islands similarly followed its own distinct path.[5] While Yayoi culture reached as far south as the Amami Islands, it does not seem to have ever been present in the Miyako or Yaeyama Islands.[6] In most of Japan, people began to cultivate rice in wet rice paddies, as well as other grains including barley and millet; use of seafood and marine products, as well as fruits, nuts, and other forest products, expanded as well. Bronze mirrors, symbols of wealth, power, and prestige held by local and regional elites, were largely imported in this period, becoming more widely produced within Japan only in the Kofun period.[7] Bronze bells known as dôtaku are another iconic product of the period. Produced within Japan using clay or stone molds and metals imported from the continent. Though bell-shaped, many scholars have expressed skepticism that they were designed to actually ring; rather, dôtaku are believed to have served some kind of ritual purpose. As many dôtaku have been found on the edges of fertile cultivable land, some scholars have suggested they may have been intentionally buried in such locations as a ritual means of encouraging agricultural production.[8]

Yayoi period settlements were generally comprised of pit dwellings with thatched roofs, gathered together in groups of roughly five homes organized around elevated storehouses. Villages of three, four, or five such groups (thus, approx. 15-25 homes) were surrounded by dry moats, earthenworks and fences, defending the village against outsiders.[9] These settlements were larger than in earlier periods, and more complex, and physical, violent conflict between communities seems to have increased dramatically. Some communities began to construct walls, stockades, and watchtowers, and to locate their homes in strategically defensible positions; remains with evidence of violent injury by axe, arrow, or the like have also been found. There is also evidence of the emergence of class divisions within communities, as leaders or elites began to receive more elaborate burials, and were buried alongside larger groups of grave goods. By the end of the Yayoi period, relatively distinct polities emerged, with local chieftains, or "kings," some of which traded with, or otherwise were in contact with, polities on the Korean Peninsula and the Chinese mainland; some appear in ancient Chinese records, which made reference to the Kingdom of Na, the Kings of Wa, etc. One community particularly prominent in these records is called Yamatai, and is said to have been ruled by a queen named Himiko (or Pimiko); debate continues as to whether this powerful political center was located in Kyushu, in the Kinai, or elsewhere.

The end of the Yayoi period is marked by the expansion of these developments, with the beginnings of a firmer consolidation of power in the Yamato plain, and the construction of grand burial tomb-mounds called kofun, after which the succeeding period, the Kofun period, is named.