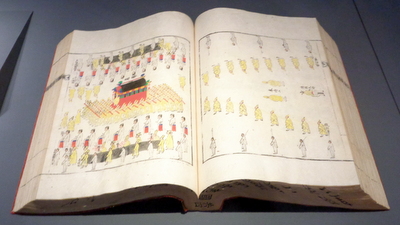 Uigwe of the ritual protocols of the 1897 state funeral of Empress Myeongseong. National Palace Museum of Korea.

The uigwe are official records commissioned and kept by the royal court of Joseon Korea.

Each such record was created in several copies, including hand-painted original copies on silk, and moveable type printed copies.

Of the thousands of volumes of uigwe, nearly 300 volumes were taken by French soldiers in 1866 and kept at the Bibliothèque nationale de France (National Library of France), in Paris, until 2011, when they were loaned indefinitely to be displayed in Korea.

While much of the uigwe were stored at the Kyujanggak (Royal Library) at Changdeokgung Palace, this group of volumes were kept at a secondary library on Ganghwa Island. Ganghwa was attacked and seized by French forces in 1866, as part of a punitive mission launched in response to the execution of a number of French missionaries by the Korean court. The secondary library was burned down, and these volumes taken. Scholars at Seoul University, working alongside others, began formally campaigning for the volumes' return in 1991, and were finally successful twenty years later. These volumes are now held on long-term loan at the National Museum of Korea, though they are still officially owned by the National Library of France.