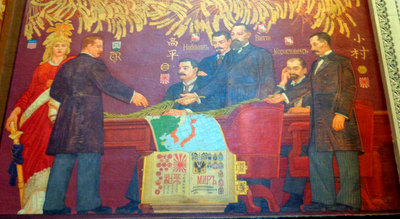 The signing of the Treaty of Portsmouth, as depicted in a wall mural at the American Museum of Natural History, New York City.

The Treaty of Portsmouth, signed on 5 September 1905 at the Portsmouth Naval Yard in Maine (USA), marked the end of the Russo-Japanese War. President Theodore Roosevelt of the United States served as the primary mediator between Japanese Foreign Minister Komura Jutarô[1] and his Russian counterparts.

In the terms of the treaty, Russia recognized Japan’s dominant political, economic, and military position in Korea; ceded the southern portion of Sakhalin to Japan; transferred railroad rights and other privileges in Manchuria to Japan; and transferred a lease on the southern part of Liaodong peninsula to Japan.

Theodore Roosevelt was granted the Nobel Peace Prize for his role in mediating the peace.

The people of Tokyo, upset at the peace conditions, rioted in protest. In what was perhaps the first major urban riot of the Meiji period, citizens set fire to the prime minister's residence, electric streetcars, and police boxes.[2]