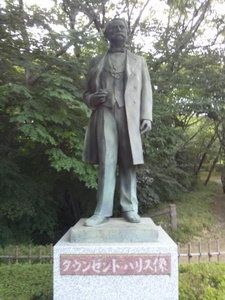 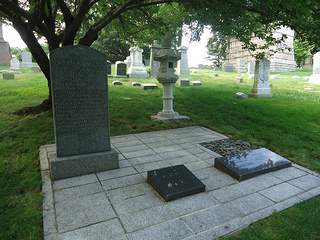 Following Commodore Perry's 1854 Convention of Kanagawa, a US consulate was established at Shimoda. While on his way to Japan in 1856 to take up his post as the first US consul general resident in Japan, Harris concluded a trade treaty with Siam; during his brief time in Siam, Harris is famously quoted as telling the Siamese king

“The United States does not hold any possessions in the East, nor does it desire any. The form of government forbids the holding of colonies. The United States therefore cannot be an object of jealousy to any Eastern Power. Peaceful commercial relations, which give as well as receive benefits, is what the President wishes to establish with Siam, and such is the object of my mission.”[1]

Following these events in Siam, Harris arrived in Japan on August 21, 1856 (7/21 on the Japanese calendar) aboard the San Jacinto,[2] with official documents from President Franklin Pierce, and with the aims of concluding a commerce treaty with Japan. It is fair to assume that his statements in Siam reflect the attitudes of the US government at this time regarding relations with Japan as well. Harris was given the temple of Gyokusen-ji in Shimoda to use as his residence; on 8/9 (on the Japanese calendar) he raised the American flag over the temple and declared it his consulate.[3]

Harris remained in Shimoda for some time, and negotiated a draft of a treaty with Shimoda bugyô Inoue Kiyonao and Nakamura Tokitsumu, completing the exchange of ratification instruments on 1857/int.5/6.[4] This treaty allowed for extraterritoriality, and for some degree of residency, trading, and movement privileges for Americans within a set area centered on the ports of Shimoda and Hakodate.

While many daimyô and others supported the shogunate in allowing Harris to visit Edo, feeling it was unavoidable given the circumstances (some of them perhaps fearing greater foreign threats of violence should the shogunate resist), many others strongly opposed allowing the US to station a resident consul in the city; some went so far as to say that doing so would destroy the spirit of the people. At some point in late 1857, a failed attempt was made on Harris' life; the men responsible, residents of Mito han, turned themselves in to Mito domain authorities on 11/27.[5]

It was not until some time later that Harris was able to enter into negotiations with the shogunate's Lead Elder (rôjû shuza) and gaikoku jimu toriatsukai, Hotta Masayoshi, to work towards a treaty which would open full formal diplomatic and commercial relations between the US and Japan. Harris is described as being "overbearing and arrogant," insisting on presenting a letter from President Pierce only to the shogun, and refusing to speak to any other officials as to the nature of the "important matter" which he intended to speak to the shogun about. This resulted in Hotta being even more resistant and oppositional than he might have been otherwise, and repeatedly rejecting Harris' requests to travel to Edo. In the end, however, with the arrival of another American warship, the Japanese relented. Harris traveled to Edo that December, was granted an audience with the shogun, and from that point forward, remained in Edo and entered more earnestly into negotiations with Hotta.[6]

Harris presented the Japanese with a draft treaty which provided for the exchange of formal diplomatic representatives & establishment of consular residences in their respective capitals; the opening of Osaka, Kyoto, Edo, and three other ports to trade; and rights of Americans to freedom of movement and free trade within Japan. He insisted upon the acceptance of this draft of the treaty, and refused to entertain consideration of any drafts based on treaties Japan previously signed with the Dutch or the Russians. As a result, negotiations were dominated by Harris' demands and Japanese officials' resistance to those demands. In the end, the Japanese were successful only in rejecting the opening of Kyoto, and freedom of movement within the country for Americans other than diplomatic agents or consuls. Four ports, including Osaka and Hyôgo, were opened to American ships, as was Edo, to residence and commercial activities of Americans, along with the establishment of an American consular residence in Edo.[6]

After roughly two years of negotiations and difficulties, on 1858/7/12 (July 29), he was finally able to convince the Tokugawa shogunate to agree to a treaty, opening a number of ports to US trade, and granting Americans a degree of extraterritoriality, among other points.

Harris took up residence at Zenpuku-ji in the Azabu neighborhood of Edo in 1859/5 (June), at the same time as the British consul Rutherford Alcock established himself at Tôzen-ji in Takanawa, and the French consul Gustave Duchesne de Bellecourt set himself up at Saikai-ji in Mita.[7]

He returned to the United States in 1862/4, after more than five and a half years in Japan. His time in Japan and relationship with a geisha named Okichi has been fictionalized in numerous plays and films, including Madame Butterfly, and Berthold Brecht's "The Judith of Shimoda."

By the author of Japanese Inn. A blow-by-blow, non-flattering account of Harris' first year in Japan, in Shimoda. The book is particularly interesting because it uses a wealth of Japanese material, both national and local, to show how his presence affected national politics and also how the shogunate as well as the local Shimoda village officials dealt with this nuisance.