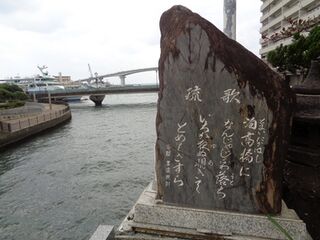 Stone inscribed with a ryûka poem about Tomari Takahashi, at Tomari Port

Tomari was a district of the city of Naha, the chief port of the Kingdom of Ryûkyû, and a major port in its own right. The port district sits at the mouth of the Azato-gawa (Azato River), and served as a key transport point, connecting water routes to land routes (roads).

A one-kilometer-long, narrow earthen embankment called the Chôkôtei connected the tiny off-shore island of Ukishima, where most of the other districts of Naha were located, to the Okinawan "mainland," ending at the temple of Sôgenji in Tomari.

Tomari was one of the chief ports on the island, along with Makiminato, as early as the 13th-14th centuries. During the time when the kingdom of Chûzan was ruled from Urasoe (i.e. up until the 1410s or 1420s), Tomari was home to a number of government offices and warehouses. A notable bridge in the area, still famous today, is known as Tomari Takahashi; originally built in wood, it was replaced with a stone bridge in 1699.[1]

King Shô Hashi (r. 1422-1439) made Naha the chief site for receiving foreign ships, and the port city quickly came to eclipse both Tomari and Makiminato as the kingdom's central port. However, ships from Yaeyama, Miyako, Amami, and other outlying islands within the kingdom, including those bringing tribute, continued to make port at Tomari. The Tomari satonushi or Tomari kashira-dori, the chief administrator for the district, was also in charge of receiving and managing the tribute from Amami. His office was known as Tumai udun; the district also contained warehouses for storing the tribute goods, known as Ôshimakura.[2]

In the 19th century, when European and American ships began to call at Ryûkyû, Ryukyuan and Satsuma han authorities did not wish to allow these ships into Naha Harbor; thus the water off of Tomari were employed as an anchorage, and foreigners who came ashore thus did so in Tomari, and not in Naha proper. A monument still stands today at the Tomari International Cemetery marking that Commodore Perry came ashore near that spot in 1853.