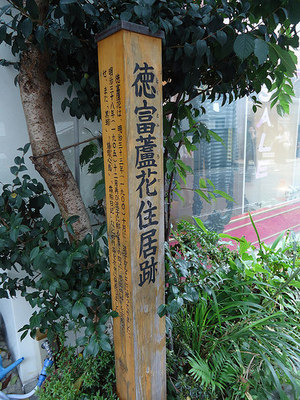 A wooden marker at the site of Tokutomi's home in the Omotesandô/Harajuku neighborhood of Tokyo. He moved here from Zushi in October 1900, and returned to Zushi in December 1905, completing his novel Omoide no ki in the intervening time.

Tokutomi Roka was a prominent novelist of the Meiji period, and younger brother to writer and politician Tokutomi Sohô.

Born in Kumamoto han the son of a gôshi (rural samurai), Tokutomi was christened as a boy. After his graduation from Dôshisha University, he joined his brother's Min'yûsha (Friends of the People Society) in 1889.

Hototogisu, one of his first and most popular novels, was published serially in the Kokumin shimbun ("Citizens' Newspaper"), with which his brother was affiliated. Roka later published a number of other novels, including Shizen to jinsei ("Nature and Life") and Omoide no ki ("Record of Memories").

Roka's relationship with his brother Sohô became strained in the early 1900s, and they reconciled in 1927, the day before Roka's death following some medical procedure.